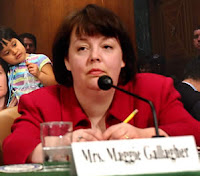 Gay marriage advocates believe there isn't any difference between two men in a sexual union and a husband and wife, and those of us who see this difference are blinded by hatred and prejudice. They delegitimize opponents, brand us as haters, and then try to strip us of our rights. - Maggie Gallagher, The Core Civil Right to Vote for Marriage

The shtick of Maggie Gallagher, founder of the anti-gay National Organization for Marriage, is to play the victim.

She consistently whines that people like herself and her organization are being unfairly attacked and called "bigots" simply because they want to defend the supposedly "time-honored" belief that marriage is between a man and a woman.

Her constant complaints are really nothing more than a cynical ploy to divert attention away from the fact that in reality she has no logical arguments to oppose marriage equality.

And it reveals an ugly degree of selfishness indicative of many who oppose marriage equality. In Gallagher's world, it's not the lgbt couples being denied their rights that matter, but only herself and those like her who stand against marriage equality while claiming to be besieged and scandalized by "pushy, aggressive, radical homosexual activists."

However, if Gallagher wants to continue this charade, she really should address the company that she keeps and supports such as The Traditional Values Coalition, who is listed as an anti-gay hate group by the Southern Poverty Law Center.

And bear in mind that this distinction isn't simply because the group believes that homosexuality is a sin. According to SPLC, anti-gay hate groups:

. . . have engaged in the crudest type of name-calling, describing homosexuals as "perverts" with "filthy habits" who seek to snatch the children of straight parents and "convert" them to gay sex. They have disseminated disparaging "facts" about gays that are simply untrue — assertions that are remarkably reminiscent of the way white intellectuals and scientists once wrote about the "bestial" black man and his supposedly threatening sexuality.

When it comes to this description, TVC passes with flying colors. Among other things, the organization has:

claimed that the passage of ENDA would lead to the sexual abuse of disabled veterans,

continued to intentionally mix the term "sexual orientation" with "paraphilias" in another attempt to lie about ENDA,

used bad research  in YET another attempt to lie about ENDA, including distorting marketing statistics, and

claimed that a repeal of Don't Ask, Don't Tell is a bad idea by asking, amongst other silly questions, how would the military " handle sodomy in battlefield situations,"

Yet this is the same group which Gallagher's group (NOM) freely cited as a credible source in regards to a recent Republican primary in California.

And now via Goodasyou.org and blogger Matt Algren comes news that NOM has been aligning itself with one Louis J. Marinelli III.

Marinelli identifies himself as a "NOM strategist" and will also be working on the organization's 2010 Summer for Marriage Tour.

He is also a man who has never met an anti-gay distortion he didn't like. According to Goodasyou.org, his past tweets have been very interesting:

there was a retweet that declared all gays to be single. There was the time that Mr. Marinelli said that Peter LaBarbera and his fringe "Americans For Truth" group merely "tell the truth about homosexuality." There was the determination that marriage equality is "a mockery and a hijacking of the civil rights movement." There were times when he flat-out called us an abomination, citing Leviticus. There was this one: "Deviance" describes actions or behaviours that violate cultural norms - homosexuality is far from a cultural norm. Therefore, it is deviant." And this: "Homosexuality and gay marriage are wrong and harmful to society." And this: "#iaintafraidtosay that there shouldn't be any recognition of homosexual relationships because that is saying that homosexuality is OK." There was this one, accompanied by a smile: "What they do is blantantly [sic] immoral. :)" There were times when Mr. Marinelli compared our unions to that which might exist between a sterile brother and sister. And other times when our very character was assaulted: "#nevertrust activists of the homosexual agenda - they are deceitful people who care only about themselves and not what's best for society."

And Marinelli also creates anti-gay videos including one in which he claims that:

. . . the homosexual agenda is really about the 3 Ps: prostitution, pedophilia, and polygamy.

Gallagher has no room to claim that the she is unfairly being called a bigot when she and her organization chooses to associate with those who freely and unapologetically stigmatize the lgbt community.

It's the equivalent of beaning people with rocks and then hiding your hands when they come to investigate.

UPDATE - Marinelli's video was public until learlier today when it was "suddenly" marked as private, which means only Marinelli's youtube friends can view it.

Posted by BlackTsunami at 3:43 PM No comments: Links to this post

Gay man claims Parkersburg officers beat him - In MY state of South Carolina? There will be more about this as news filters in. Apparently this happened in Charleston, WV. Still it's an ugly incident.

'Wow, what a long engagement that was!' - True love DEFINITELY waits.

If You Can't Beat 'Em, Outbreed 'Em - You just KNOW that the American Family Association's Bryan Fischer includes the lgbt community in this diatribe. But doesn't he know that heterosexual parents create lgbt children?

Gee thanks, Kansas City Star - No wonder we can't get the media to cover SC Black Pride. There isn't anyone running around "nekkid"!

Posted by BlackTsunami at 8:44 AM No comments: Links to this post

I semi-forgave the television show The Boondocks for it's homoerotic take down of African-American playwright Tyler Perry last week.

This week's episode, A Date With The Booty Warrior, may be a bit more difficult to forgive.

In this episode, Tom Dubois, a character in The Boondocks, takes several students to jail as a part of the "Scared Straight" program, where inmates warn troubled students to either change their ways or end up in jail.

Problem is that in this particular program, the inmates are more concerned with telling the students about raping and being raped in prison.

I won't even talk about the peanut butter and jelly scene.

One of the prisoners is shown in this opening scene raping Chris Hansen of To Catch A Predator:

A. Tom Dubois has a serious fear of - in the words of the series - "going to prison and being anally raped."

B. The inmates decide to start a rebellion. In the middle of this rebellion the prisoner in the above sequence decides to go after Tom:

I understand comedy is sometimes x-rated and I really do like the Boondocks, but is making fun of male rape appropriate?

What do you think?

UPDATE - It turns out that Tom's nemesis is based upon this man:

Posted by BlackTsunami at 5:29 AM 3 comments: Links to this post