Black leaders should not ignore same-sex families of color 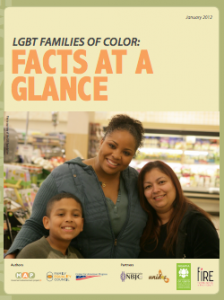 Today, a coalition of public policy and family advocacy organizations released “LGBT Families of Color: Facts at a Glance,” which sheds light on the disparate impact of outdated laws and family policies on LGBT families of color and their children. The publication explores the challenges that LGBT Families of color face on a daily basis and dispels the myth often perpetuated in the media that LGBT families are largely white and middle class.

According to “LGBT Families of Color,” there are roughly 2 million children in the United States being raised in LGBT families and 41 percent of these families are people of color. Both black and Latino same-sex couples are more likely to raise children than white same- sex couples. Black lesbians for example are twice as likely to be raising children as their white lesbian counterparts. The report also notes that:

An alarming number of LGBT families of color are living in poverty. For example, 32 percent of children being raised by black same-sex couples are living in poverty compared to 7 percent of children raised by married heterosexual white parents. Yet many of these families, simply because they are LGBT, are denied access to safety net programs and federal and state tax benefits that would improve their economic situations.

The report gives a number of good solutions to this problem. I have a solution also.

How about the power brokers in the black community give this report some attention.

I'm talking to every organization claiming to speak for the black community, particularly those who publish annual "State of Black America" reports.

This is the time where we need true black leadership. These families need support but unfortunately they don't seem to get it.

What they do get are charlatans turning cute phrases against marriage equality in public while getting their palms and egos greased in private by mostly white-led religious right groups eager to play the black and gay communities against one another.

I get so tired of hearing about a coalition of black pastors standing at a press conference whining - at the behest of the National Organization of Marriage or what ever other religious right group - that one "can't equate sin with their skin" or  "that homosexuality cannot be equated with being black."

It saddens me that these pastors are deliberately ignoring the fact that they know same-sex families of color who would benefit from their support. These families aren't going to disappear no matter how many Biblical verses are spoken.

It pains me that these supposed men and women of the cloth are fooling themselves into thinking that God somehow smiles upon them as they spew rhetoric which makes life difficult for these families and their children.

And it angers me that folks like Smiley, Martin, and many other black leaders will most likely cling to their Bibles as an excuse to ignore these families, as an excuse do the wrong thing rather than a reason to do the right thing.

These pastors and these leaders need to acknowledge same-sex families of color because until they do, they are stabbing their own people in the back.

Posted by BlackTsunami at 3:04 PM No comments:

NH Republican Lawmaker: Push To Repeal Marriage Equality Will Create ‘Backlash Against Republicans - Word to with wise: you lay down with the National Organization for Marriage, you will come up with fleas.

The Top 10 Ways You Can Help the Global Gay Movement - Every last one of these ideas are excellent suggestions.

Franklin Graham: Political Correctness is 'Persecuting Men and Women of Faith' - Apparently, "persecution" now means giving an assload of radio and television interviews to talk about how "persecuted" you are.

The Family Research Council has launched a new webpage and I say that its a victory for the work that has been done to call out the organization's lies.

Family Research Council (FRC) president Tony Perkins sent an email to supporters warning about “The Commitment Campaign,” an effort launched in November by Third Way to reframe the debate over same-sex marriage by discussing the value of commitment between gay spouses. According to Perkins, the campaign is a “deceptively-named” attempt to affirm “fake ‘marriage,’ ” and FRC needs donations to stop it.

However it's too bad that the organization neglected to correct the errors when it comes to pushing reasons why marriage equality is so-called fakery. FRC makes the following three claims:

Children will be indoctrinated:

If same-sex "marriage" is legalized, sex-ed classes from K-12 will be required to teach that same-sex relationships are virtuous, and that anyone who disagrees "such as parents or pastors" are bigots. One homosexual opinion leader, Daniel Villareal, admitted, "Recruiting children? You bet we are! We wanted to deliberately educate children to accept queer sexuality as normal." FRC experts have documented this agenda, and your donation will help us inform more lawmakers, courts, and parents.

Leave it to FRC to take one point by one gay author and use it to generalize about the entire community. Villareal of the online blog Queerty was merely making a point - albeit in a fashion more suited to shock rather than logic - that the lgbtq community must not allow the right to define the argument when it comes to children and learning about same-sex relationships because not only are these relationships positive but also there are children being raised in same-sex homes. FRC took only paragraph out of his piece. You can read the entire piece here.


You will lose religious freedoms

Same-sex marriage at the local level has already been used to shut down Christian adoption agencies in Boston and the District of Columbia. Consider that. If same-sex marriage is imposed nationally, church facilities, family ministries, Christian officials "like county clerks and justices of the peace" and Christian-run wedding businesses and more will be pressured to compromise their views or face crushing legal consequences. Your donation will help FRC experts expose these dangers.

These agencies were receiving tax dollars to provide services but they refuse to allow same-sex couples to adopt the children in their care. Church facilities are not forced to hold same-sex weddings. Clerks and justices of the peace are elected to follow the law, not their own religion. And if the law says that same-sex couples should be allowed to wed, those officials should either follow the law or resign. Finally "Christian-run" business generally have to follow non-discrimination laws, just like every other business. One wonders if FRC would be so favorable to said business if the owners specifically wouldn't cater to Christians.

Lives will be ruined by deception

Decades of social science research shows that same-sex relationships do not have the same level of commitment as traditional marriages. Promiscuity, mental and physical health problems, and other turmoil in same-sex relationships vastly exceed that of heterosexual relationships. That is not message of hate, as homosexual activists claim. Ours is a message of fact-based, loving concern for all, including those trapped in homosexuality. Silence is not loving. Your donation will help FRC speak the truth in love.

Here lies our victory. Usually when FRC pulls the "homosexuality is a dangerous lifestyle" lie, the organization supplies links to studies and research - albeit the studies are fraudulent pieces written by FRC members such as Peter Sprigg or studies taken out of context. But there is nothing here. FRC doesn't even bother to post any proof of its claims.

Who knows? Perhaps being declared a hate group by the Southern Poverty Law Center and the constant stream of truth-telling by bloggers like myself is making FRC reluctant to put its phony proof on the table.

All in all, FRC's "Stop Fake Marriage" page is amusing. The only reason why anyone should donate to this page wouldn't be out of righteous indignation, but rather pity in hopes that with more money, FRC could come up with a less pathetic website.