First it was about bakeries, now it's about families and children. 'Religious liberty' is a homophobic sham

Fatma Marouf and Bryn Esplin have been married for nearly three years. They have long wanted to have children, and decided they wanted to become foster parents for a refugee child and asked to start the licensing process. However, when in their first interview they revealed that they were a married same-sex couple, the affiliate’s Director of International Foster Care informed them that they would not be permitted to apply to be foster parents because their family structure did not “mirror the Holy Family.” Fatma and Bryn’s humiliating rejection as foster parents illustrates how one of our most cherished rights is being tuned into a weapon to discriminate against LGBT people – and further, how opponents of LGBT equality are attempting to put discrimination beyond legislative or judicial remedy by wrapping it in the language of “religious freedom.” Lambda Legal has filed a federal lawsuit against the U.S. Dept. of Health and Human Services (HHS) and the U.S. Conference of Catholic Bishops (USCCB) on their behalf. Learn more about the case here.


This could be any of us, folks. When we said that the fight against the religious right bastardized concept of religious liberty was more than about baking cakes and buying flowers, the case of Fatma and Bryn is what we were talking about.

We are facing a nationwide crisis: over 100,000 children in child welfare systems nationwide are currently in need of loving, stable homes, but there is a shortage of available foster homes. As tax-payer funded child-placing agencies struggle to find care for these children, seven states have allowed them to refuse to place children with LGBTQ families or people of different faiths. In states like Oklahoma and Kansas, waves of discriminatory, anti-LGBTQ bills are threatening to become law. A similar law in Texas, which went into effect last fall, not only allows these government-funded providers to turn away loving families, but permits them to engage in religious education, opening the door to “conversion therapy” or to refuse to acknowledge a transgender youth’s identity and deny services — including medical care — the child may need.


It was never about cakes or flowers. It was always about keeping the LGBTQ community under heel, as well as undermining our rights and ability to function as regular human beings, complete with having families.
Posted by BlackTsunami at 4:55 PM No comments: 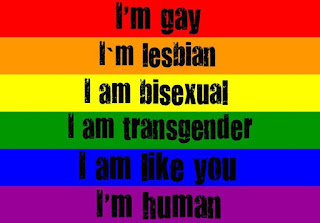 Carson and DeVos both admit their departments are abandoning transgender people - IF we let them. And we won't.

Trump administration scrubbed lesbian & bi women’s health info from government website - They think they are being slick, but we see them.

Texas bombing suspect compared ‘unnatural’ homosexuality to paedophilia and bestiality - Not trying to be "that guy," but I seem to remember when that awful man shot Congressman Steve Scalise, certain people made a note of how he was a fan of the Southern Poverty Law Center. Just noting that in the silence over this guy.

Teens Who Hide Their Sexuality Have Higher Suicide Risk, Study Finds - Confirmation of past research which puts the blame on homophobia for negative behaviors in LGBTQ youth.
Posted by BlackTsunami at 9:07 AM No comments: