And the award for the most inane reason to celebrate Trump's electoral victory goes to the leader of the anti-lgbt hate group American Family Association, Tim Wildmon.

According to him, had Hillary Clinton won, she would have "criminalized Christianity." It's a ridiculous notion seeing that she is a Christian herself and Christianity was never in danger of being "criminalized" had she won the election.

It's equally ridiculous to think that any religion can been saved by a narcissistic, paranoid blowhard who likes to brag, gets easily baited by tweets, and talks about grabbing women by their nether regions.

But here we are: 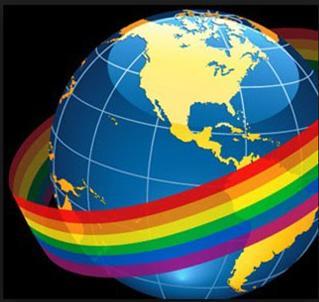 The Trump/Pence administration will likely switch sides on global LGBT rights - The irony of Trump attempting to scare lgbts about homophobes in foreign lands become even starker when one realizes that perhaps neither he nor Pence will speak out in defense of the lgbts in those areas who are being persecuted. Must be busy "protecting" so-called Christian bakeries and flower shops from those evil lgbts who dare to want to give them money. And here is a good morsel from the article. Apparently Pence and Russian leader Vladimir Putin use the same reasoning against lgbt rights:

Both (VP-elect Mike) Pence and Putin say that although individual gay people should be left alone, they should not be recognized as a politically organized subgroup that can advocate for protection. Putin considers such advocacy to be propaganda. Either these leaders do not know, or do not mind, that violence is threatened against the many people who are gender nonconforming or attracted to others of the same sex (or both). If Putin or Pence acknowledged such persecution, they might have to support mandates to protect that minority.

Donald Trump Was About To Make Jerry Falwell, Jr. Education Secretary. Let That Sink In. - Oh yeah. THAT would have been fun.

David Barton Says He’s A Victim Of ‘A Macro-Aggression’ That Attacks His Faith And Right To Free Speech - That's terrible . . . unless "macro-aggressions" are the same as "major aggressions." Barton certainly deserves more than "minor aggressions."
Posted by BlackTsunami at 9:12 AM No comments:

President-elect Donald Trump is expected to select Georgia Congressman Tom Price as the secretary of Health and Human Services. This pick is bad news for Obamacare and the lgbt community.

Price, an orthopedic surgeon, has represented a suburban Atlanta district in Congress since 2004. In addition to being an opponent of the Affordable Care Act, popularly known as Obamacare, he has a string of zeroes on the Human Rights Campaign’s Congressional Scorecard for opposing LGBT rights. He called the Supreme Court’s 2015 marriage equality decision “a sad day for marriage.” He also is against abortion rights and opposes federal funding for Planned Parenthood.


It is no doubt that Trump is counting on Price to assist in the so-called dismantling of Obamacare, a promise he made while campaigning, and create a replacement; something Trump and the GOP has been less vocally strident about.

In terms of the lgbt community, aside from I posted from The Advocate, a 2013 conference call Price participated in is now in the spotlight.

Georgia congressman and potential Senate candidate Tom Price appeared  . .  on a conference call with Tea Party Unity, the group founded by far-right pastor Rick Scarborough, where he agreed with a caller who suggested that any bill involving social issues should require a study of the “fiscal impact” the legislation would have.

The caller was none other than Rabbi Noson Leiter, who blamed Hurricane Sandy on New York’s marriage equality law. Leiter warned about the “tremendous medical health impact and economic impact” of the “homosexual agenda” and asked Price whether Congress will consider studying the “fiscal impact” that “promoting such a lifestyle will result in.”

Price hailed Leiter and said he was “absolutely right,” adding that “the consequences of activity that has been seen as outside the norm are real and must be explored completely and in their entirety prior to moving forward with any social legislation that would alter things.”

He went on to say he was dismayed by “people who wake up one morning and think that they’ve got a grand new way of doing something” that ends up becoming “a huge cost-driver to state pensions” and have significant health costs.


Price seems to have been embracing the religious right distortion that "homosexuality is a dangerous lifestyle." This is a talking point so-called traditional values groups like the Family Research Council embrace by trumpeting negative health  statistics about the lgbt community, while often times ignoring or deliberately omitting how societal homophobia creates the conditions which causes said negative health.

The Huffington Post has pointed out how Price could, as HHS secretary, undermine lgbt health:

Lesbian, gay, bisexual, transgender and queer individuals have long dealt with particular health challenges, including discrimination ― which can contribute to mental health issues, poverty and substance abuse ― physical and sexual violence, HIV and AIDs. They also routinely face stigma from health care providers, such as denial of care and being blamed for their health status. Carriers have also denied coverage based on “pre-existing conditions,” such as having a transgender medical history.

Democrats and the Obama administration took unprecedented steps to address these problems, including carving out nondiscrimination protections through the Affordable Care Act. If the health care law is repealed ― an action Price has supported ― many of these protections would likely go away. But even if the law stays on the books, the Trump administration could choose not to prioritize enforcement of LGBTQ protections, or to go further and try to change the rules.


And the only individuals coming out on top in either scenario would be groups like the Family Research Council because they would have more potential outcomes of negative lgbt health to exploit and lie about.
Posted by BlackTsunami at 5:02 AM No comments: