Bryan Fischer: Quarantine those with HIV

It's apparent that the AFA's Bryan Fischer got jealous of all of the attention Fox & Friends got for their mind-numbing desire to make a joke out of football player Ray Rice's abuse of his wife. That and he is just being his usual ignorant self:

It's genuinely sad what is considered mainstream and Christian these days. I imagine that if folks raise a big enough stink over these comments, other so-called Christians will be coming out of the woodwork to defend Fischer.

Really, it's even sadder how little self-accountability it is these days from the so-called "Holy Sect." All you have to do these days when you say something dumb as hell is to claim that "God/Jesus told me to speak this in truth" and you get undeserved credibility.
Posted by BlackTsunami at 2:43 PM No comments:

It always amazes me when I read anything written by Matt Barber of the Liberty Counsel and the rabidly anti-lgbt publication BarbWire. I would actually respect his audacity  . . . that is if I didn't find him spiritually repulsive.

Case in point, his latest post, How Christian Kids Should Deal With ‘LGBT’ Peers. Believe or not, in this screed, Barber makes comments like the following:

So, with all of this cultural “progress” away from comprehensively fixed natural and moral laws, an inevitable question arises: How should Christian children and teens interact with peers who either identify with, or are believed to engage in, a lifestyle marked by homosexual or cross-dressing behaviors? The answer, generally speaking, is fairly straightforward: They should interact as all Christians should interact with all fellow sinners, with all people – with prayer, humility, wisdom, justice, honor, mercy, love and truth.

. . . I can’t abide bullies. Never could. Most decent folks can’t. This is how I was raised. It’s also how I’m raising our three children. As did my father before me, I am teaching and equipping them to stand up to bullies. Not just when, and if, they happen to be the target of bullying themselves, but also when, and if, others are targeted. I’m raising my children to be friend to the friendless and champion to the vulnerable. I’m proud to say that all three of them are naturally inclined to such. I credit both God and His word of truth for that.


Excuse me? Isn't Barber the same guy who sent out the following tweet about gays and the boy scouts: 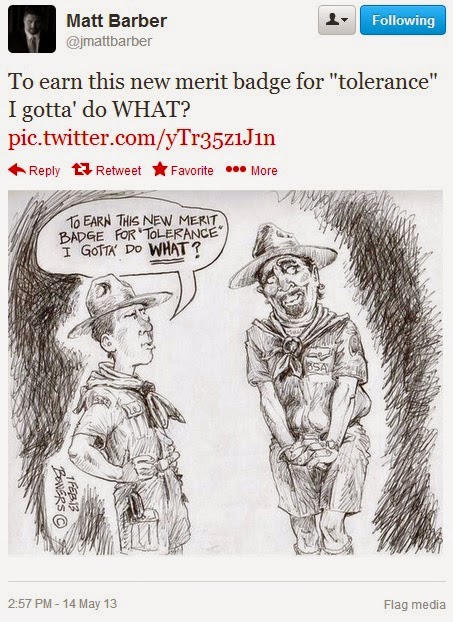 And let's not forget several of his comments over the years about the lgbt community (courtesy of GLAAD Cap):

uses words like "purveyors of evil" or  "satanic" (1:19 in video clip) to refer to his political opponents

parents of a transgender child should be investigated for child abuse


Barber's writing and public utterances is like his personality - a silly schizophrenic concoction brewed by a man who thinks that the rest of America, particularly the lgbt community, is as forgetful and stupid as his supporters.  It serves to prove that he is not only a hypocrite and a homophobe, but he is also not that bright. What else can you call a man who goes on and on about his faith and love of God when there is a paper trail (easily found, I might add) which proves otherwise.
Posted by BlackTsunami at 10:19 AM 2 comments:

True to form, NOM misrepresents (GOP-appointed) judge who dared reject their tripe - As to be expected, NOM is not happy with the recent court case bringing marriage equality to Wisconsin and Indiana. Time to break out the pictures of Brian Brown crying his eyes out.


Tony Perkins: Smithsonian 'Ignores The Destructive Side Effects Of Homosexuality' - This story actually signals progress. It used to be that folks like Perkins would go into detail with junk science and cherry-picked studies when they talked about the false dichotomy of homosexuality having dangerous "side effects." However, since lgbt bloggers, etc. began listing specific incidents and times when anti-gay groups would distort science and research, folks like Perkins can only spin horror tales about homosexuality in vague, unfamiliar terms.

When Gender Norms Didn't Work for My Kid - A fascinating read.

Together 72 Years, Women In Their 90's Marry In Iowa - Those dern homosexuals have NO idea of commitment (sarcasm alert).

South African Artist Brings Her Collaborative Portraits Of Trans People To The Americas For The First Time - This is pretty cool.
Posted by BlackTsunami at 9:00 AM No comments: