If you want to know why so many folks are alarmed with Jeff Sessions' so-called religious liberty task force, this tweet sent out today by the Family Research Council should clue you in. Folks on the right are already attempting to weaponize the task force to attack the Southern Poverty Law Center.

"When you've got an organization in the U.S. that is illegitimately targeting groups because of their Christian views and you have agencies in the federal government that are legitimizing that data, that is a recipe for disaster." @GenBoykin @PJMedia_com https://t.co/B9F9cAlX9e
— FRC (@FRCdc) July 31, 2018 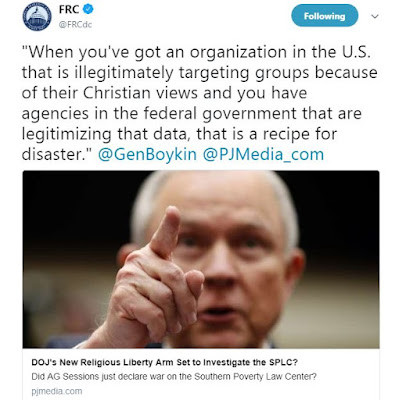 The article in question, which contained the following quote from FRC official Jerry Boykin, is nothing but drivel. It is yet another attack on SPLC for accurately designating organizations like the Family Research Council as anti-LGBT hate groups.  What makes this particular situation very problematic is how the article implies that the full weight of the United States Justice Department would fall on SPLC's head under the guise of "protecting religious liberty."

And the drama isn't even about religious liberty or religious beliefs. 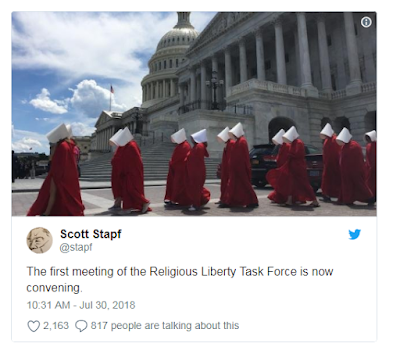 Twitter Rains Hell On Jeff Sessions’ New Religious Liberty Task Force - This picks up my spirits big time. Jeff Sessions' conservative evangelical supremacy 'religious liberty' task force is highly unpopular because no one is fooled about its actual goals. And it has been dragged through twitter. I say we continue to drag it through twitter nonstop.

Jeff Sessions’ Justice Department Promotes Religious Right’s Take On Religious Liberty - Just in case you need more confirmation as to what Sessions and his cohorts in the religious right are attempting . . .

Trump administration says it’s time to stop punishment of anti-gay African countries - Or ways this task force and mess like it will probably harm LGBTQ safety . . .

Rude comment at 'Religious Liberty' Summit reveals ignorance & desire to erase LGBTQ taxpayers - Because those pushing this task force don't care about the LGBTQ community. They want to erase our children, our families, and our dignity as taxpayers.

Our Tax Dollars Shouldn’t Fund an Anti-LGBTQ “Religious Freedom Task Force” - Basically hell yeah. But calling it a “religious privilege task force” is too nice. We need not pussyfoot about this monstrosity of a sham of a mess this task force actually it. It is a Conservative Evangelical Supremacy Task Force.