Former Arkansas governor and possible 2012 Presidential candidate Mike Huckabee came to the defense of the Family Research Council today during an interview with the Walton Sun.

He was responding to the fact that the Southern Poverty Law Center had named FRC and other religious right groups as anti-gay hate groups.

Huckabee is seriously displaying his ignorance here. The Southern Poverty Law Center did not designate FRC as an anti-gay hate group because its opposition to gay marriage. According to SPLC:

Even as some well-known anti-gay groups like Focus on the Family moderate their views, a hard core of smaller groups, most of them religiously motivated, have continued to pump out demonizing propaganda aimed at homosexuals and other sexual minorities. These groups’ influence reaches far beyond what their size would suggest, because the “facts” they disseminate about homosexuality are often amplified by certain politicians, other groups and even news organizations. Of the 18 groups profiled below, the Southern Poverty Law Center (SPLC) will be listing 13 next year as hate groups (eight were previously listed), reflecting further research into their views; those are each marked with an asterisk. Generally, the SPLC’s listings of these groups is based on their propagation of known falsehoods — claims about LGBT people that have been thoroughly discredited by scientific authorities — and repeated, groundless name-calling. Viewing homosexuality as unbiblical does not qualify organizations for listing as hate groups.

Huckabee is doing what he has done many times in the past when it comes to the lgbt community - attempting to shift the argument so that the lgbt community looks like the aggressors and folks like him look like the "innocent Christians persecuted for their faith."

But Huckabee is peddling lies and before he defends FRC, he should explain the following photo: 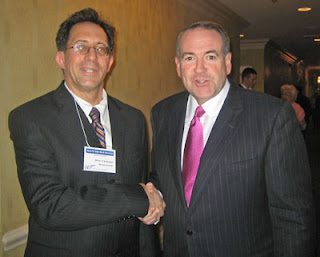 The man with Huckabee in this picture is Brian Camenker of Mass Resistance, an anti-gay organization in Massachusetts which was also named as an anti-gay hate group by SPLC. And this picture was taken during a religious right conference last year.

Mass Resistance has a long history of demonizing the lgbt community and even stooping to coordinating phony moral panics, including:

The organization was also key in manufacturing inaccurate claims about Obama appointee Kevin Jennings in an attempt to get him dismissed. The watchdog site Media Matters published a list of the lies Camenker and Mass Resistance spread about Jennings.

Camenker has even bragged that Huckabee is aware of his group:

When told Brian was from MassResistance, Gov. Huckabee said, "I know. I get your emails."

Seems to me that Huckabee defends anti-gay hate groups like the Family Research Council not because they are innocent victims of a supposed "radical homosexual conspiracy," but because his views probably align closely with theirs.

Hat tip to People for the American Way

VA official Eugene Delgaudio's latest: 'homos recruit our children into their filthy perversion' - Ugh. How can you say anything when someone is so hateful. You let those words speak for themselves.

Gay and lesbian teens are punished more at school, by police, study says - This ain't good!

Christian Conservative Must Replace Jewish TX House Speaker Because Christians "Do The Best Jobs Over All" - Nothing like a little anti-Semitism to make your Mondays go wrong.

Tony Perkins of the Family Research Council is still smarting over the Southern Poverty Law Center designating his organization as an anti-gay hate group.

In an interview with a "friendlier" political journalism webpage, Tucker Carlson's Daily Caller, Perkins again complained about being unfairly attacked. But then he added a new charge against the SPLC:

Perkins told TheDC that the SPLC cherry-picked the scientific evidence it chose to cite against the Family Research Council and other similar groups in its related report, titled “10 Anti-Gay Myths Debunked”, and ignored contrary evidence.

“We actually went through the studies they cited in their report and have seen the flaws in them, and we pointed to other peer-reviewed research,” Perkins said. “We’re not saying every homosexual has a proclivity to abuse children or that most of them do, but we are saying there is a link that is out there in the research.

Perkins did not say which studies were cherry-picked. But the comment he made to the Daily Caller does represent a retreat from a position he made during an interview on Hardball:

If you look at the American College of Pediatricians' research, they say the research is overwhelming that homosexuality poses a risk to children.

Perkins did not address his citing the ACP, a sham group created to launder religious right distortions about the lgbt community.

And also in a serious irony, while he accused the Southern Poverty Law Center of cherry-picking science, Perkins never addressed the fact that he did the same thing during the Hardball interview when he cited a study in the Archives of Sexual Behavior.

In this study, according to Perkins, 86 percent of men who molest children identified as gay.  He conveniently did not mention that in the study of 229 convicted child molesters,  63 victims were male, and 166 victims were female.  Eighty-six percent of 63 isn't a drop in the bucket and it's certainly not enough to make a generalization in regards to the gay community.

Wendy Wright of  the Concerned Women for America, another organization profiled by SPLC for it's anti-gay bias, was also interview in the Daily Caller article.

The Family Research Council and Concerned Women for America say the studies SPLC cites in its reports suffer from serious methodological errors and politically motivated biases.

“Liberal groups claim all of the science is on their side, and that’s simply not true,”  Wright said. “They refer to studies that often were conducted by homosexual activists or people associated with the homosexual movement.

“Unbiased studies back up the fact that engaging in homosexual behavior carries detrimental consequences; oftentimes these studies were sponsored or paid for by homosexual advocacy groups.”

In its profiles and list of anti-gay myths, SPLC cited many sources including the American Academy of Pediatrics,  American Psychological Association, A. Nicholas Groth (who was ironically cited by the Family Research Council in one its past studies on homosexuality and pedophilia before he demanded that they remove his name and research from their work), The Child Molestation and Research Institute, the Child Welfare League of America, the National Organization of Male Sexual Victimization, Nicholas Eberstadt, of  the conservative American Enterprise Institute, The Palm Center, and Richard J. Wolitski, an expert on minority status and public health issues at the Centers for Disease Control and Prevention.

Neither Perkins nor Wright pointed out just how these sources showed any bias or initiated studies "conducted by people associated in the homosexual movement," although Wright later claimed that lgbts have "taken over" leading mental-health research organizations.


The social conservative groups take particular aim at SPLC’s claim that the minority status of gays and lesbians accounts for the “higher rates of anxiety, depression and depression-related illnesses, and behaviors like alcohol and drug abuse than the general population.”

Perkins points to peer-reviewed studies done in the Netherlands and elsewhere, where homosexuality is tolerated to a greater degree than in the U.S., that show gays and lesbians still suffer from these same maladies, including elevated rates of suicide, even in the absence of widespread anti-gay prejudice.

If Perkins and Wright sought to quell the discussion on whether or not their organizations can be considered as anti-gay hate groups, again they have failed.

Instead, they seemed to have unintentionally opened up a new avenue of questions by accusing SPLC of cherry-picking studies, but not naming these studies.

I, for one, is interested in seeing their evidence of cherry-picking on the part of SPLC, that is if they have any evidence.

The dangers of anti-gay propaganda - A personal story

The Family Research Council should be apologizing to the gay community

Posted by BlackTsunami at 5:30 AM 3 comments: Links to this post