As if by magic (wink, wink, nudge, nudge), there is yet a third group which seeks to exploit President Obama's support of marriage equality in order to sabotage his support in the black community.

This organization is called Pivot Point and has been running the following ad on BET:

If you are keeping score, Pivot Point is the third group seeking to persuade African-Americans to not vote for Obama.

The first was the Coalition of African-American Pastors (CAAP) and the second is called God Said.

All three groups share the similar goal - the defeat of President Obama, but approach it in different manners.

CAAP is trying to persuade African-Americans to withhold their votes from Obama because of his support of marriage equality.

God Said claims that it wants to "strip" Obama of 25 percent of the African-American vote because of his support of marriage equality.

And here is something else. All three groups share the same interesting fact - they all have mysterious or questionable funding and memberships.

CAAP is run by William Owens, who is also the liasion for the National Organization for Marriage, an anti-marriage equality group who has already endorsed Obama's opponent, Romney. He has admitted to receiving a "salary" of $20,0000 from NOM. Harry Jackson is also involved with CAAP and through two other groups, NOM has funneled $80,000 to him.

Owens and Jackson are also involved in God Said. It is not known where God Said's funding is coming from but the group has pledged $1 million for its campaign. One more thing you should know about God Said.

A member of its board is Jesse Lee Peterson, head of Brotherhood for a New Destiny (BOND). Peterson has made many questionable statements about African-Americans, including the following about victims of Hurricane Katrina"


About five years ago, in a debate before the National Association of Black Journalists, I stated that if whites were to just leave the United States and let blacks run the country, they would turn America into a ghetto within 10 years. The audience, shall we say, disagreed with me strongly. Now I have to disagree with me. I gave blacks too much credit. It took a mere three days for blacks to turn the Superdome and the convention center into ghettos, rampant with theft, rape and murder.

Also involved in God Said is Alveda King, MLK's niece. King has made a name for herself by being "the African-American face" in many conservative events, that is when she is not insulting MLK's late widow, Coretta.

As for Pivot Point, there is nothing known as of yet about it, except for the irony that for a supposed African-American oriented group, it is run by a white "scientist" name Dave Shemwell.

In an interview with The Slate, Shemwell said:


"I've been working with a fellow named Wayne Perryman, a local black evangelical pastor in Washington state who's been active in gang outreach and various religious outreach programs . . . Since he's also a Romney supporter, I said I want to reach out into communities that are not Republican. I started talking about jobs, and all the things that people have in common, and he said: You're not going to reach anyone that way." So they cut a more personal ad, thinking of what might appeal to black voters who think that "despite being the first African-American president, Barack Obama hasn't done anything to help the African-American community. One of the focus groups on Fox News had a black guy who said: Nobody is even talking to us. And that's the problem. There are people who are exactly like us in their conservative stances, but who we can't get to vote our way."


Perryman is a Washington pastor affiliated with the tea party. In 2010, he gave a speech repeating the false story that President Obama went on an apology tour, detailing about how he is tired of the "race card" being played, and proclaiming that whites do not get enough credit for their part in ending slavery. I kid you not:

According to Shemwell, the group will be focusing ad buys in Ohio. This is probably because Ohio is conveniently the state which many have said will probably decide the election and Obama is ahead there.

I personally find what happening regarding CAAP, God Said, and Pivot Point to be fascinating in the fact that the media will most likely make a lot of noise about these groups.

We will probably see discussions on news programs (comprised predominantly of white pundits, of course) who will talk about why these groups are appropriate and refreshing or why they are bogus.

Meanwhile, the African-American will do what we have always done in cases like this. Keep quiet because we know the media isn't really interested in talking to us about these situations, talk amongst ourselves, making sure to laugh loudly at the foolishness of the whites behind these organizations and shake our heads at the greed of the African-Americans fronting these organizations.

And finally, pull that lever for who WE have decided to support, which will be the person we have seen on our side and fighting for us.

I don't think I have to elaborate on who that is.

Posted by BlackTsunami at 4:18 PM 2 comments:

MN For Marriage spokesman caught comparing gays to Hitler (*just like he's done before) - Why don't we ever get compared to Bette Davis in "All About Eve" or Faye Dunaway in "Mommie Dearest?" I mean what's with the Hitler thing? At least the person voicing those ugly comments is catching hell for them.

Log Cabin Republicans’ False Hope That Romney Might Support LGBT Nondiscrimination Protections - I would laugh if this wasn't so pathetic.

Kuhner: 'Gay Gestapo' Will Have Opponents 'Burnt at the Stake' - It drives me CRAZY that I don't get these memos from the "Gay Gestapo." I thought I was a member in good standing.

According to The Seattle PI, the National Organization for Marriage is funneling $199,970 in order to defeat Referendum 74, the bill which allow marriage equality in Washington.

That would bring a grand total of $1.225 million that NOM has given the anti Ref-74 group, Preserve Marriage Washington.

The Seattle PI also points out that the anti-Ref 74 group has serious ground to make up. The pro-Ref-74 group has reportedly raised over 10.4 million and pre-election polls in pre-election polls show marriage equality with support at or just over 50 percent in not only Washington but also two other states - Maryland and Maine - who are having ballot fights on marriage equality.

Of course this does not mean for folks on my side to throw the confetti and pass out the champagne as of yet. However, based upon pictures of a rally against Ref-74, it appears that the those against the bill have other areas to make up in.

Naturally, NOM brags on this rally with the following pictures:

The movement to protect marriage is diverse and inclusive! Check out these photos provided by Preserve Marriage Washington, which is urging Washingtonians to reject Referendum-74 (gay marriage): 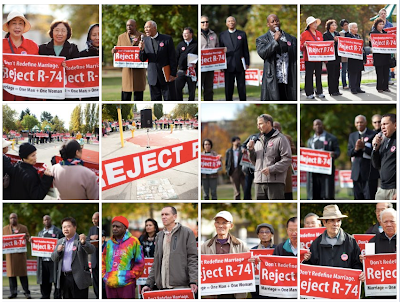 It's rather embarrassing to claim that your side has diversity and then repeatedly show pictures of the same elderly people.

Posted by BlackTsunami at 4:54 AM 3 comments: