I interrupt my nightly blogging regarding anti-gay distortions to make this announcement:

There is just too much damn sadness in the world today.  So for Throwback Thursday, I posting clips from two of my favorite movies.

The first is from the Mel Brooks comedy Blazing Saddles. Never mind what it's about. Let's just say it began as a comedy western until the fourth wall was broken, thereby causing this inside joke about old Hollywood musicals to erupt in delightfully offensive chaos:

The second clip is from the movie The Ritz, which really didn't do that well as a motion picture, but it was a hit as a Broadway play, which earned Rita Moreno a Tony award as incredibly bad singer Googie Gomez. Here she is doing her hit number in a gay bath house. And it is bad. Hilariously so. Although I LOVED the way she walked out at the beginning: 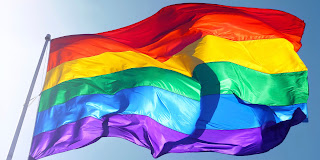 Christian schools seek Title IX waivers to bar trans students - Feel free but don't think you have a right to tax dollars. Exemptions only go so far and they should never coddle discrimination, particularly when it comes to our lgbt kids and their education.

Dominican cardinal calls married gay U.S. ambassador ‘wife’ - It was meant to be nasty and it's not the first time this cardinal got ugly with the lgbt community.

Arkansas Refuses To List Same-Sex Parents On Birth Certificates Despite Judge's Ruling - Uh hello! Arkansas needs to get with the program.
Posted by BlackTsunami at 9:06 AM No comments:

It's not just that presidential candidate Ted Cruz had a conference call with anti-gay activists. It's also the fact that these activists are extremely hardcore anti-gay:

Sen. Ted Cruz continues to woo anti-gay extremists, this time appearing on a conference call for conservative activists organized by E.W. Jackson, the former GOP nominee for lieutenant governor of Virginia. During his run for office, Jackson won notoriety for his remarks about gay people, whom he referred to in one interview with fringe anti-gay leader Peter LaBarbera as “perverted,” “degenerate,” “spiritually darkened” and “frankly very sick people psychologically, mentally and emotionally.” As it happens, LaBarbera, the leader of Americans for Truth About Homosexuality, was on the call that Jackson organized with Cruz last week and had a chance to ask the Texas Republican about his stance on “the gay agenda.” LaBarbera asked Cruz how he would reverse the Supreme Court’s marriage equality ruling and if he would “end Obama’s policy of actually flying the rainbow flag at U.S. embassies worldwide” and oppose “the Equality Act, which I’m calling the Homosexual Superiority Act, in Congress.” Cruz only answered LaBarbera’s first question about the Obergefell case, railing against the landmark gay marriage decision as “one of the greatest threats to our democracy we had seen in modern times,” and went on to criticize President Obama for being “more interested in promoting homosexuality in the military than he is in defeating our enemy.”

I know the lgbt community likes to have our autonomy when voting, but it would do us well to pay attention to this upcoming election because some folks are determined to make us one of the issues . . . again.
Posted by BlackTsunami at 4:52 AM No comments: