It would seem that several anti-gay spokespeople and groups, specifically the American Family Association, are sending out emails accusing Macy's department store of not just sponsoring "gay pride" events but rather sponsoring "sex parades." There is just one problem with that accusation as seen by the AFA email below. See if you can guess: 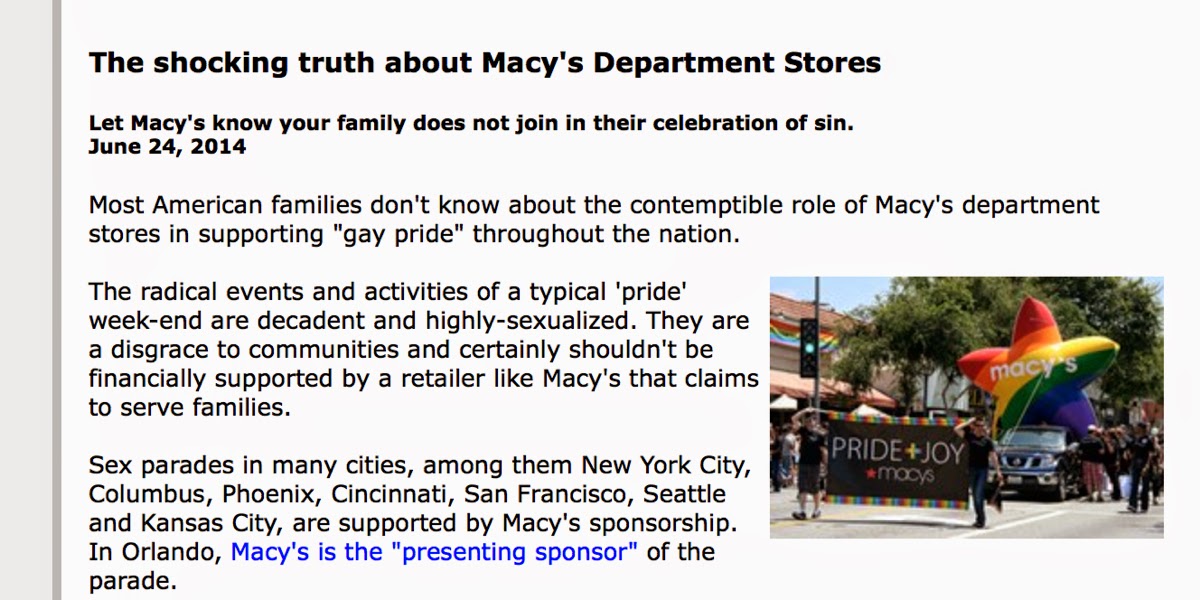 Now, I haven't performed my rendition of the "beast with two backs" in almost a year but I know things haven't changed so much that the above scene constitutes a "sex parade."

As a matter of fact, according to blogger extraordinaire Jeremy Hooper, AFA pilfered the above photo from a personal blog showcasing a 2010 West Hollywood gay pride parade and as it happens, there is absolutely NO SEX of any kind going on in those photos.

By the way, I am taking tremendous personal risk in revealing my lack of a sex life. If anti-gay groups are to be believed about the number of times us gays have sex in a year, I am waaaay below my quota, which means if the Gay Mafia finds out, I'm going to go up for re-education. Oh God, I just can't take anymore marathons of "Queer as Folk."

William Owens: 'We Must Be Willing To Die' In Fight Against 'Abnormal' LGBT Rights - Willie, you know damn well you are not prepared as long as NOM is giving you $20,000 to act like a fool.

UN Human Rights Council Adopts Resolution On “Protection Of The Family” - This is dangerous because of the potential omission of lgbt couples.
Bryan Fischer Can't Understand Why Anti-Gay Bigots Are Demonized For Living In The World Of Common Sense - You ever had one of those questions which makes you swoon in anticipation of giving an answer?
Posted by BlackTsunami at 9:08 AM 2 comments:

Unbelievable. I am speechless with regards to how the situation with Crystal Moore in Latta, SC has turned. From the Huffington Post:

Residents in the town of 1,400 people had just overwhelmingly voted to reinstate her as their police chief and to strip the mayor, Earl Bullard, of some of his powers. Bullard fired Moore from her post in April for reasons that many residents believe had to do with her being a lesbian. Tuesday's vote, which came in direct response to Moore's firing, changed the governing structure of the town from “mayor-strong” to “council-strong," which meant the town council could and would put Moore back in her job as soon as possible.

But that all changed on Wednesday, when Bullard unexpectedly announced that he had just hired someone else for the post. WPDE NewsChannel 15 reported that Bullard hired someone named Freddie Davis on Monday, in what appears to be a final show of power by the mayor before he loses it at the end of the week to the council. Bullard's carefully timed move falls just outside a 60-day waiting period the council imposed in April to specify when another police chief could be hired.

. . .  Latta council member Jarett Taylor said Wednesday night that it appears Bullard broke local laws by writing up a contract unilaterally with Davis."He needed council approval to do that," Taylor said in an interview on MSNBC's "The Last Word."

"We're going to test his ability to put the new chief under contract. The council supports Crystal 100 percent," Taylor said. "I've spoken to all six council members and we're still behind Crystal."


Moore was appointed police chief before being fired by Bullard. The speculation was that Bullard fired her because she was lesbian. Bullard denied this, but a taped conversation in which he made rude comments regarding the lgbt community and children contradicted his claim. Since that time, Bullard and the Latta town council have been feuding over his actions. With this latest move, the feud doesn't look like it will be over any time soon.
Posted by BlackTsunami at 5:07 AM 2 comments: