WASHINGTON, D.C. – Family Research Council President Tony Perkins released the following statement in response to this morning’s U.S. Supreme Court nomination hearing for Judge Brett Kavanaugh: “This hearing is a snapshot of where America is and where we will head if the Left has the reins of government. The idea that this is about reviewing millions of pages of documents is laughable.

Remember, this is the party of Nancy Pelosi who said of the most expansive piece of government policy, Obamacare, that they would have to pass the 2,300 page bill and then read it. The audience outbursts and the obstruction by the Democrats was reportedly coordinated in a conference call yesterday.

“This really validates what President Trump told evangelical leaders last week. The Left will stop at nothing as evidenced by the violence of Antifa. The unhinged conduct of the Left should make it crystal clear what is not only at stake in the balance of the Court, but the future of our country. “America is at such a critical stage that for Christians or conservatives to step back for just one moment could result in the loss of not just the fundamental freedoms reestablished in the last two years, but the loss of the Republic as we have known it,” concluded Perkins.


It's amusing of the Family Research Council to cry foul over how the Democrats are merely demanding an open and full vetting on Kavanaugh's record.

Read more »
Posted by BlackTsunami at 5:08 PM No comments: 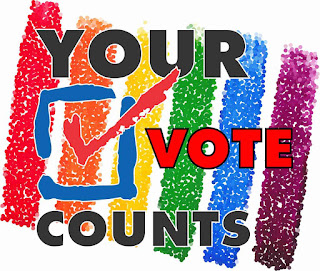 Rise Of LGBTQ Candidates Could Usher In A 'Rainbow Wave' In 2018 - I put something like this out in August and as we get closer to the midterms, it's looking more like a reality. This a good thing and may it continue regardless of how 2018 turns out. It is a perfect example of the direction the LGBTQ community should go to attain our equality and self-determination. When those with legislative power are swayed by homophobes to vote against your very survival, you BECOME some of the ones with legislative power. It can be done. And don't give me that crap about not being a "single issue voter." When the single issue is whether your marriage is safe, your loved ones are protected, or you are able to engage in the normal processes of humanity, such as raising children, that "single issue" encompasses a huge amount of sub-issues.


She could be the first trans woman in the U.S. Congress. So we talked to her. - Her name is Alexandra Chandler and I hope she wins.

Couple Paint Home In Pride Flag Colors After Neighbors Allegedly Use Homophobic Slurs - Good for them! Two snaps up in a zee formation!

Vatican admits Pope lied about meeting anti-gay clerk Kim Davis. He knew who she was. - I haven't this surprised since the late Jim Nabors came out.