Editor's note - No news briefs on Friday because of a personal issue.

I hate the fact that the Huffington Post beat me to the punch on this because I witnessed the occurrence as it took place. Still, it's nice to point out.

Anti-LGBTQ pastor and Donald Trump supporter Franklin Graham took it upon himself to scold presidential candidate Pete Buttigief about his sexual orientation in a series of posts like so:


Mayor Buttigieg says he’s a gay Christian. As a Christian I believe the Bible which defines homosexuality as sin, something to be repentant of, not something to be flaunted, praised or politicized. The Bible says marriage is between a man & a woman—not two men, not two women. 2/3
— Franklin Graham (@Franklin_Graham) April 24, 2019 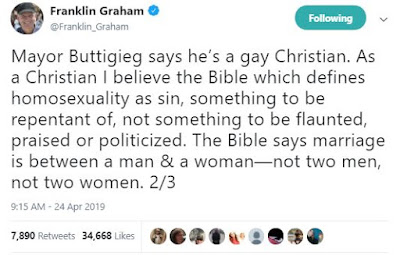 Usually when Franklin tweets something, particularly about current events (and taking an anti-LGBTQ point of view), the retweets are mostly "amens" and sycophantic agreements. Not this time. Franklin got twitter spanked so badly that he was reduced to meekly posting other Biblical verses. Some of the responses he received from the Buttigieg tweets are as follows:


You epitomize one of Jesus' disciples.

No, man. You were reading BREITBART, not the BIBLE.

Read the Jefferson Bible. With scissors and paste he took only the words of Jesus-.ignoring the rest. Jesus did not have a word of condemnation for gay people. Surely you can find better things to do than hating on us, while pandering to Trump.
— Mia Farrow (@MiaFarrow) April 25, 2019

Wake me up when Franklin Graham calls on Donald Trump to repent for being a serial sexual-assaulter and cheater. https://t.co/ubUNHUbXvM
— Ana Navarro-Cárdenas (@ananavarro) April 25, 2019

Franklin Graham is not just a false prophet; he’s a sorry excuse for a person who claims to follow Christ.

This is not of Christ. This is of a cynical callousness toward everything Christ preached.

My queer identity is inextricable from my Christianity. This is how God made me. https://t.co/PIO2hcVmHk
— Charlotte Clymer🏳️‍🌈 (@cmclymer) April 25, 2019


I'm not God, but I know a heart filled with kindness and love will find favor in the sight of God, regardless whom they chose to share affection with. But a deceptive soul and those who condone them with be condemned. People like you sir, are the reason there's hate in the world
— I dig deep, lightly (@TrueSatire) April 24, 2019


Needless to say that others were, shall we say, less polite. But you can click on Graham's tweet and read the responses for yourself.
Posted by BlackTsunami at 3:18 PM No comments:

Trump's military ban on transgender troops is back in effect -  But the fight isn't over - It's never going to be over until we win.

Major Corporations Release Letter Opposing Anti-LGBTQ “Slate of Hate” in Tennessee - And if Tennessee doesn't get the message, then the state must pay the price for bigotry.

Trump poised to roll back transgender health protections - Trump's war on the transgender community isn't being looked at by the mainstream as something which should be taken seriously, but be patient. It's NOT supposed to be easy.

Report: Eight LGBTI Nicaraguans killed during anti-government protests - The struggle is real and it is worldwide.
Posted by BlackTsunami at 8:33 AM No comments: