New anti-LGBTQ group has me 'GAG'ging with laughter

Have y'all heard of this new anti-LGBTQ group called 'Gays Against Groomers.' The group will have you to believe that it is a coalition of gays who think that the 'radical gays' are making us all look bad supposedly sexualizing and indoctrinating kids. It's the old "America would accept and tolerate LGBTQ people if we didn't try so hard to be outrageous' argument on steroids combined with the even older lie that LGBTQ people are 'recruiting' children.

We know nothing about this group except for how it conveniently sprang up on Twitter out of nowhere, appropriates right-wing lies against LGBTQ people, and that the conservative propaganda industry is trying hard to make it seem legitimate.

I say it's all astroturfed bullshit, probably from the same grimy political crevice which created and funds that droll Libs of TikTok. And like Libs of TikTok, 'Gays Against Groomers' uses the modus operandi of mischaracterizing tweets and slandering people as examples of LGBTQ people supposedly sexualizing children.

Or, as the tweet below shows, making up all sorts of nonsense about LGBTQ people, teachers, and drag queens which borders on parody. 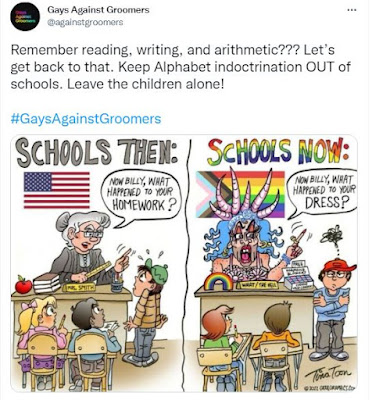 Even the name is a joke. 'Gays Against Groomers' or 'GAG' for short? Does the group even know the irony of it all? It claims to be against sexualization while reeking of sexualization.

If the group isn't legitimate, it wouldn't surprise me. Far right conservatives have a tract record of making fools of themselves when they attempt to portray themselves as  "appropriate gays." Of course if this group is in any small way legitimate, then it's obvious that its either telegraphing some serious internal homophobia or some serious carnal desires which I suggest its members need to take care of instead of pushing up on the rest of the LGBTQ community.

Hating on us ain't gonna get you laid.

Posted by BlackTsunami at 5:00 PM 2 comments: 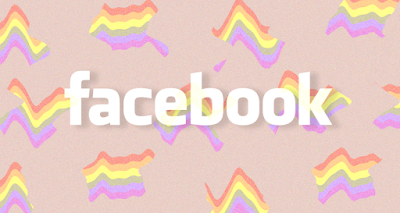 Facebook allowed dangerous anti-LGBTQ rhetoric to spread across the platform during Pride Month​ - Bombarding us with madness.
Instagram is allowing accounts to spew hate at LGBTQ people, while also claiming to support the community - Ugh! On Instagram, too.
How to Support Drag Queen Story Hour With Community-Led Safety - Don't back down an inch.
Out pro wrestlers racked up titles during Pride month - Not bad. This is significant because it means that pro wrestling groups see LGBTQ wrestlers as money makers. That's why they booked them to win titles.
Posted by BlackTsunami at 9:00 AM No comments: