Folks seem to be preparing for fake 'martyrdom' of Kim Davis, except Davis

What was that line uttered by actress Olivia DeHavilland in the motion picture "Hush, Hush Sweet Charlotte?"

You just can't keep hogs away from the trough.

Before you all even start, that was NOT a reference to anti-gay Kentucky clerk Kim Davis's appearance, but the anti-gay groups and personalities coming out of their respective caves and coffins to defend her illegal behavior.

Mike Huckabee has come out with a statement of support.  And so has presidential candidate Sen. Rand Paul. Then there is Franklin Graham and Roy Moore; two men always up for the game of "pick on the gays."

But the big booby prize goes to the online publication Breitbart: 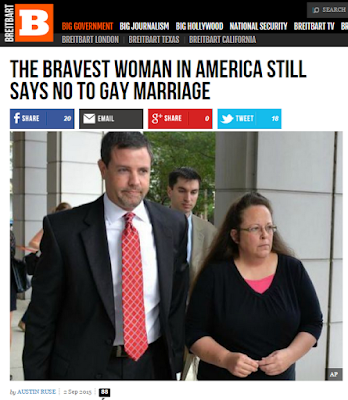 No doubt these folks are anticipating a ruling during Davis's contempt of court hearing tomorrow morning with baited breath, statements already written and fundraising appeals ready to go with breathless hope and anticipation that U.S. District Judge David Bunning will bring down a severe ruling against Davis.

There is one problem though.  Davis is trying to delay again:

Kentucky county clerk is again asking a judge to delay his ruling ordering her to issue marriage licenses to same-sex couples. U.S. District Judge David Bunning's order has been upheld by a federal appeals court and the U.S. Supreme Court. But Rowan County Clerk Kim Davis continues to disobey it, saying she cannot do something that violates her religious beliefs. Bunning has scheduled a hearing for Thursday. He could hold Davis in contempt of court, which could lead to fines or jail time. But on Wednesday, Davis again asked Bunning to delay his order so she can appeal an earlier decision on a related issue. Davis had asked Bunning last month for an injunction against Gov. Steve Beshear for ordering her to issue the marriage licenses. Bunning refused to hear that motion. By doing that, Davis' attorneys argue that Bunning effectively denied their motion, which they have the right to appeal. Davis' attorneys asked Bunning to delay his order while they appeal to the 6th U.S. Circuit Court of Appeals.


It's as if she wants to get the judge so angry that he does cart her off to jail. Hmmmm
Posted by BlackTsunami at 3:22 PM No comments:


Why The Kentucky Clerk's Last Stand Won't Make Her A Right-Wing Hero - When both anti-lgbt activists Ryan Anderson AND Maggie Gallagher says you have gone too far, perhaps it's time to assess the stance you took, Kimmy dear. And the article, like several cute men I know, teases me by implying that at tomorrow's contempt hearing for Davis, the judge may have something not nice in store for her attorneys at the Liberty Counsel. Oh well, I can always dream.

14 Ex-Ex-Gays Paving the Way Forward - In other news . . . the best thing is that these 14 individuals are no longer buying the lie that being gay is evil.

"Gender Bender": The Troubling Way Fox & Friends Discusses A Transgender Student's Use Of Her High School Girls' Locker Room - Thank you Fox News. I can always count on you to make stuff worse than it needs to be.
Posted by BlackTsunami at 9:21 AM No comments: 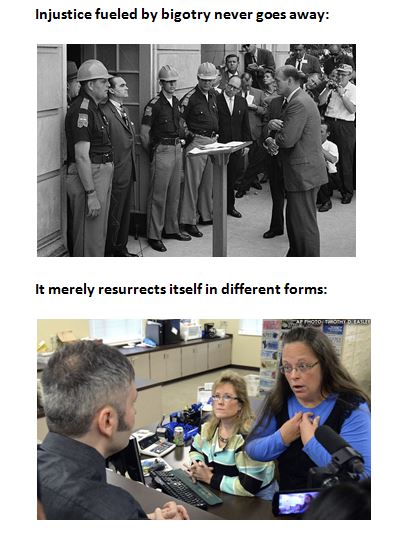 When this madness with Kim Davis is over (because all things must pass, thank God), the above image is what I am going to carry with me.

The  black and white photo was taken in 1963 of Alabama Governor George Wallace standing in front of a Foster Auditorium to symbolically, but not actually,  block two African-American students from entering the University of Alabama. It was a gesture he took to protest the desegregation of public schools, which was ordered by SCOTUS in 1954.

The bottom picture is that of Kentucky clerk Kim Davis refusing to give a marriage license to a gay couple, in spite of that the fact that SCOTUS  made same-sex marriage legal.

And please don't give me any nonsense about how the civil rights movement and the movement for lgbt equality are different. There is no difference here.

Both  photos underscore people being denied rights which they fairly won via our system of jurisprudence. Both photos underscore odious demagogues (George Wallace, Kim Davis) deciding that he or she will take it upon themselves to circumvent the rule of law simply because they don't agree with it. And both photos underscore how some people can deprive American citizens of their dignity while deluding themselves with the ugly fantasy that they are somehow taking a stance for righteousness.

Anyone viewing  the photos of Kim Davis and George Wallace shouldn't waste precious time attempting to deny their similarities. Rather they should be asking themselves why hasn't America matured enough over the decades so that the  ugly event in 1963 didn't repeat itself in 2015.
Posted by BlackTsunami at 4:57 AM 2 comments: