It's not a secret that various religious groups and figures are eager for Trump to push their issues (i.e. anti-lgbtq religious liberty, conservative SCOTUS justices), but it's getting embarrassing to watch how some of these supposed purveyors of values stoop to justify Trump's failures and unethical missteps.

First, there is Franklin Graham, who out the following Facebook message encouraging Trump to not reveal his taxes: 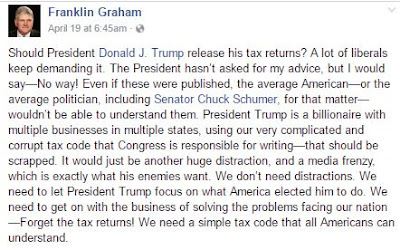 Should President Donald J. Trump release his tax returns? A lot of liberals keep demanding it. The President hasn’t asked for my advice, but I would say—No way! Even if these were published, the average American—or the average politician, including Senator Chuck Schumer, for that matter—wouldn’t be able to understand them. President Trump is a billionaire with multiple businesses in multiple states, using our very complicated and corrupt tax code that Congress is responsible for writing—that should be scrapped. It would just be another huge distraction, and a media frenzy, which is exactly what his enemies want. We don’t need distractions. We need to let President Trump focus on what America elected him to do. We need to get on with the business of solving the problems facing our nation—Forget the tax returns! We need a simple tax code that all Americans can understand


In spite of Graham's claims of the contrary, it's more than just "liberals" who want  Trump to release his taxes. According to an April 10 edition of  Money magazine:


In addition, according to poll conducted by Global Strategy Group, 64 percent of Republicans also want Trump to release his taxes.


First 100 days: An exhaustive list of all of Trump’s pro-LGBTQ ‘wins’- Regardless of how one feels about Trump, this list is 100 percent accurate . . .

Media Matters' Erin Fitzgerald: Anti-LGBTQ Hate Groups Are Using The "Media As A Battleground" To Promote "Cloaked Discrimination" - Unfortunately, the media has been very derelict in this area.

I want you to know what it feels like to be a trans person in Trump’s America - Sad but needed commentary.

Trump Transition Aide: Obama’s ‘Aggressive LGBT Agenda Will Be Unhinged’ Under Trump - Who else but Ken Blackwell from the anti-lgbt hate group The Family Research Council.

This Transgender Army Veteran Won’t be Silenced Under Trump - We have NOT forgotten about Trump's homophobic, transphobic pick for Army secretary.

Late last week, the Human Rights Campaign announced a new project calling out the transphobic lies of infamous former Johns Hopkins professor Paul McHugh. McHugh has been a long-time opponent of the transgender community. His anti-transgender claims have been criticized for lack of veracity, but the religious right and their supporters still cite him.

. . .the HRC Foundation launched McHugh Exposed, a website that pulls back the curtain on the anti-LGBTQ myths and junk science being peddled by Dr. Paul McHugh, the go-to ‘expert’ for anti-equality extremists. The resource includes a detailed timeline of how McHugh’s hateful and damaging essays have been used to target and attack LGBTQ people and a new video featuring renowned LGBTQ health expert, Dr. Tonia Poteat. It can be found at www.McHughExposed.org. McHugh’s false, non-scientific assertions have been used by anti-equality activists in state legislatures and courtrooms to defend discrimination against LGBTQ people.

. . . “Paul McHugh’s writings continue to dangerously undermine the safety, security and wellbeing of LGBTQ people, and particularly transgender youth, across the country,” said Mary Beth Maxwell, HRC Vice President for Research, Training, and Programs. “McHugh’s junk science is still being referenced in legislative and legal battles despite the fact that Paul McHugh has no academic expertise in either gender or sexual orientation, and actively avoids publishing any of his anti-LGBTQ pieces in peer-reviewed journals. Policy makers, informed citizens and parents deserve to know that this is junk science and personal opinion - not at all in the mainstream of current medical and academic research and not endorsed by Johns Hopkins regardless of how McHugh uses his title to suggest credibility or expertise.”


HRC also launched a wonderful video (seen above) which throws "shade" at religious right groups and their phony "policy experts," i.e. the spokespeople they employ to go on news programs and in front of state and federal legislative bodies to spread their homophobic talking points.

This overall project by HRC is the latest endeavor by progressive and lgbt organizations to expose conservative and religious right groups who push lies and junk science against the lgbt community behind the facade of "religious liberty."


Read more »
Posted by BlackTsunami at 4:44 AM No comments: