Recently, there was a controversy in a Vermont high school. Allegedly, some girls got barred from the women's locker room because they objected to a trans student being there. How the narrative of this situation was perceived is best described by a tweet sent out about it by far-right pastor Franklin Graham: 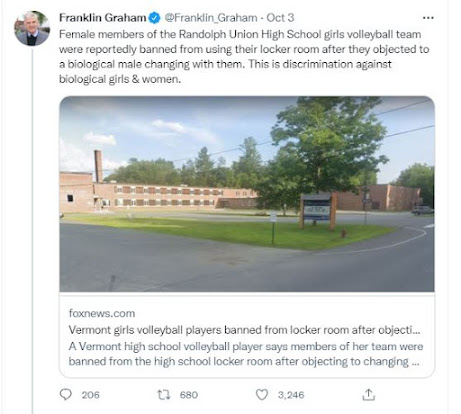 As you can see, Fox News covered the story and they had a field day with it, even inviting Caitlyn Jenner to rail against the school and the trans teen. Other members of the right-wing media joined in with  the narrative being that these cisgendered girls were being discriminated against because they felt uncomfortable around a trans female.
According to LGBTQNation:

Last week, WCAX-3, a CBS affiliate in the state, reported in a post since removed that the Randolph High School girls’ volleyball team had been “banned from its own locker room,” under a banner headline reading “Gender locker room dispute.” Right-wing media jumped on the trans-hate catnip.
The original story quoted cisgender student Blake Allen, who claimed she and her teammates in the locker room were the targets of an inappropriate comment by a trans girl, triggering an incident between students. As a result, the school shut the locker room down while the dispute was being investigated.
In an interview, Allen told WCAX: “They want all the girls who feel uncomfortable, so pretty much 10 girls, to get changed in a single-stall bathroom, which would take over 30 minutes. Where if one person got changed separately, it would take a minute, like no extra time.” She added: “My mom wants me to do this interview to try to make a change.”

As it turns out, there was more to the story. And the members of the media would have probably gotten it right . . . if they had talked to the trans student and her mother with as much eagerness they took in allowing Ms. Allen to define the situation.
LGBTQNation points out that the trans teen and her mother was not asked by WCAX to give their side of the story. However an independent Vermont newspaper, Seven Days, interviewed them and also pointed out how much of a sad job WCAX did in reporting the story:

The news report featured an interview with just one person — a girl on the team who said that a transgender teammate made an "inappropriate comment" while other girls were getting changed for practice. The girl told the WCAX reporter that "biological boys" should never be allowed in a girls' locker room and that other teammates and parents had similar concerns.
The story cited a Vermont Agency of Education memo, titled "Continuing Best Practices for Schools Regarding Transgender and Gender Nonconforming Students," that says a student should not be made to use a locker room that conflicts with their gender identity. The news report made the Randolph mother feel sick, she said, because it flew in the face of what her daughter told her had actually happened: that other players had harassed her.

According to the mother of the trans teen, this the story no one bothered to get:

One week before the WCAX report aired, she said, her daughter was changing in the girls' locker room before volleyball practice when three teammates started yelling at her to get out and to stop looking at them. Her daughter hadn't encountered that kind of open negativity about being transgender since moving to Randolph in eighth grade, the mother said, so the aggressive comments came as a surprise. The girl had also previously changed in the same room as her teammates.
"She never really felt unwelcome or like she didn't belong," her mother said. After being yelled at, the girl went into a locker room bathroom stall to change. She wasn't sure if she was supposed to put on her team jersey, so she popped her head around the corner at one point to check with her teammates. The girls started yelling at her again. When the transgender student walked into the gym after getting changed, she encountered the volleyball coach, who told the girl that she had overheard what had happened and was planning to report the incident to the school administration.
Two days later, an administrator called the mother to tell her that three people reported that her daughter had been bullied and harassed. As a result, the school was launching an investigation. The administrator also told the mother that the girls' volleyball team could not be unsupervised in the locker room until the investigation was completed.

According to Seven Days, school officials tried to keep the locker room open by having adults supervise the students, but they were unable to because the story had gone viral and things got really ugly. The school district's site was hacked and defaced with profanity and awful comments about trans people. The trans teen herself has faced an onslaught of verbal abuse:

In the aftermath of the false reporting, the trans student has been the victim of bullying from other students and parents, who’ve labelled her a “voyeur,” “pervert,” and “freak” online.

In its article, Seven Days points out how the incident became viral, from WCAX's one-sided article to going through the right-wing media (i.e. Fox News, The New York Post, The Daily Signal) to Caitlyn Jenner's punditry to Franklin Graham who sent the above tweet out to his over one million followers. And throughout it all, no one bothered to get the trans teen side of the controversy.
They simply took a narrative and ran with it.
Posted by BlackTsunami at 4:54 PM No comments:

'GOP candidate accused 30 schools of accommodating 'furries.' The schools are calling her out.' & other Thur midday news briefs 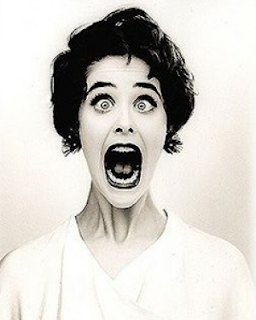 GOP candidate accused 30 schools of accommodating furries. The schools are calling her out.​ - Good. Make her prove it (and she can't.)
Oklahoma bans gender-affirming care for minors at state-funded hospital - Guess who is up for re-election. Another lawsuit to file. Our side has won thus far when it comes to nonsensical laws like this one.
Former Cop Reveals Horrific Gay Bashings by Police - We should never forget our history.
DOJ urged to investigate threats against providers of transition-related care - I don't know if I posted this in another news briefs. If so, repeating it doesn't do any harm.
GR cites wedding venue that won’t serve LGBTQ couples - Here we go again. But it needs to happen.
Posted by BlackTsunami at 8:53 AM No comments: