We are officially in the silly season of the 2012 election as evidenced by this ad which, according to the Huffington Post, ran in a number of newspapers on Sunday, including The Sarasota Herald-Tribune: 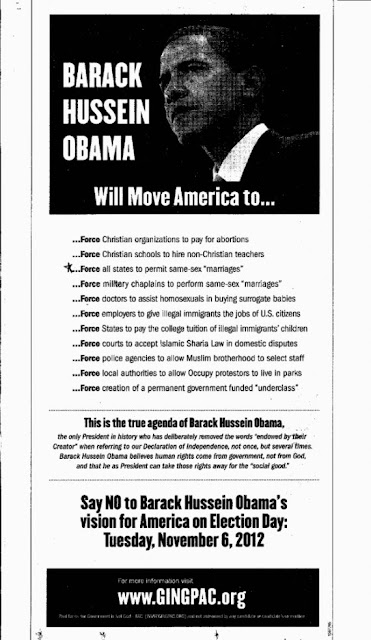 All of these claims are false, but I especially get a kick out of the claim that Obama will "force doctors to assist homosexuals in buying surrogate babies."

Not only does it dehumanize us, but it makes us look like we are treating babies like turkeys in a Thanksgiving dinner.

The ad is run by an organization called GINGPAC.org

From its webpage, GINGPAC stands for Government is Not God and it claims to be a political action committee for social conservatives. Its chairman is William J. Murray. Supposedly Murray is the son of Madalyn Murray O'Hair, the late atheist whose lawsuit in front of the Supreme Court led to the eradication of required prayer in public schools.

But that's not the most interesting thing I found out about Murray. Apparently GINGPAC is only one of the organization he leads. There is also the Religious Freedom Coalition and We The People Nation. All three groups claim that their desires are to bring America back to its supposed "Judeo-Christian" heritage.

Murray asks for "contributions" through GINGPAC and the Religious Freedom Coalition (surprise, surprise!) In addition, he also has a youtube channel.

So what we are talking about here is a one-man operation causing all sorts of chaos in the name of God.

And I thought the Catholic League and William Donohue was bad.

But to be fair, I don't think Donohue ever made a move to physically assault someone. In spite of all Murray says about "Godly values," he has a good left hook as this video from last year demonstrates:

The Tampa Bay Times contains a full list of the newspapers where Murray's ad ran. Also, according to the Times, some people are highly angry at the ad, so angry in fact that they intend to protest.

In San Francisco, Prop. 8 backer to head Catholic Church - And Salvatore Cordileone - archbishop in question - has already declared that "Gays and lesbians who are in sexual relationships of any kind . . .  should not receive the sacrament of Holy Communion." The grand irony is that he is the SAME GUY who was arrested in August for drunk driving. Maybe HE should refrain from taking the Holy Communion.

Iowa Newspapers Condemn Politicized Campaign To Oust Supreme Court Justice - This campaign by religious right groups is designed to oust judges, not for any type of corruption, but for handing down decisions which these groups don't agree with. Such a thing is a slap in the face to our republic.

In which ActRight and Preserve Marriage Washington feign disinterested party status - those interested in the hidden finances of NOM and where these monies go, have at it.

Mahmoud Ahmadinejad: ‘Homosexuality Ceases Procreation’ - Is he for real? Famine, flood, or tornado couldn't stop anyone from "procreating" or at least trying.

Batten down the hatches. We have another wannabe black leader urging African-Americans to leave the Democratic Party.

Not vote for Romney, mind you, but leave the party period.

Bishop E.W. Jackson of S.T.A.N.D. (Staying True To America's National Destiny) has launched a project called "Exodus Now," which calls for a "mass exodus of Christians from the Democrat Part."

While S.T.A.N.D. is encouraging people to vote their conscience, the group's founder asserts, "We have stayed away from either endorsing Mitt Romney or saying that this is a call to vote against President Obama and make it personal. But I will say this," Jackson adds. "We're calling people to come out of the Democrat Party and not support candidates who represent its values and the rebellion that it represents against God. That certainly would include President Barack Obama."


You say you have never heard of E.W. Jackson? Good. Then count yourself lucky. For one thing, he is a failed candidate for the United States Senate in Virginia (losing in the primary to George Allen) and  has been apparently "waging public war" with the Democrat Party since 2010 when he started his organization, S.T.A.N.D.

And like all members of the religious right, Jackson has been extremely homophobic in his rhetoric.

Read more »
Posted by BlackTsunami at 4:52 AM 4 comments: