I betcha that not too many folks are aware of the fact that A Nightmare on Elm Street Part 2: Freddy's Revenge (1985) was filled with homoerotic undertones.

Mark Patton (who later did come out as a gay man) portrays a teenager who is trying to keep from being possessed by serial killer Freddy Krueger.

Seriously though, with a plot so simple, why would someone think that this movie was gay? Well for starters, the character portrayed by Patton isn't the most masculine fellow in the world. It goes without saying that there were some scenes in which he reminded me of Sean Hayes from Will and Grace such as this one featuring  him cleaning his room:


Then there is this scene where Freddy induces the young man to go to a club where he meets his coach (starting at 2:20):

It was the first time I discovered that white male booties can jiggle. LOL

Past Know Your LGBT History postings

Posted by BlackTsunami at 4:03 PM 5 comments: Links to this post

FRC: Pray that God isn't mad at America because of THE GAYS, and other Friday midday news briefs

FRC's Call2Fall Hopes to Prevent God From Destroying America Due To Our "Sexual Immorality and Perversion" - Of all the nerve. The Family Research Council lies and misrepresents but yet will be praying to keep God from "destroying" America because of the supposed sins of lgbts. Pot meet kettle.

Robert George on Obama: Willfully Anti-Intellectual or Passively So? - In light of their embarrassing associations, NOM is still channeling the "waaaaaaaah! stop calling us bigots" line. Don't drag President Obama in your mess.


Las Vegas Church Stands By Martin Ssempa - Not only are they standing by Mr. Poo Poo but are also actively pushing his misrepresentations of the Ugandan anti-gay bill.

Google to Add Pay to Cover a Tax for Same-Sex Benefits - Excellent way to end the news posts.

I was wondering when it was going to happen. And boy did it ever:

Turner Broadcasting is trying to avoid a house of pain with producer Tyler Perry.

Perry, who has two shows on Turner's TBS cable channel ("House of Payne" and "Meet the Browns") was furious about a recent episode of the animated series "The Boondocks" that ran on Cartoon Network's Adult Swim programming block. Cartoon Network also is owned by Turner Broadcasting.

The episode in question -- "Pause" -- which first ran June 20, lampooned Perry, the creator of several hit movies, some of whom star him as Madea, an eccentric grandmother whose antics often land her in hot water. The show, which is executive produced by Aaron McGruder, who also created the now-defunct comic strip of the same name, featured a thinly veiled version of Perry named Winston Jerome. In the episode, Jerome is shown to be a closeted cross-dresser who uses religion to hide his lifestyle.

Soon after the episode aired, Perry got in touch with executives at Turner including entertainment chief Steve Koonin and Phil Kent, the chief executive of Turner Broadcasting. Perry complained loudly about the episode and even threatened to rethink his relationship with the company, people familiar with the situation said. A spokesman for Perry declined to comment.

Kent, who is a low-key executive but also a former talent agent, put his skills to work and acknowledged to Perry that the actor-producer should have been given a warning about the episode. The show, which has aired twice, is not scheduled to air again on Cartoon Network, although the company would not say if it has been banned from the channel.

I'm not saying a word.

Posted by BlackTsunami at 5:27 AM No comments: Links to this post 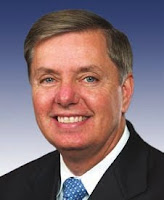 SC Senator Lindsey Graham has addressed rumors that he is gay during an interview with The New York Times:

Senator Lindsey Graham addressed rumors about being a homosexual in an interview with the New York Times.

According to the Times, Graham reportedly smirked and said: "I know it's really gonna upset a lot of gay men." "I'm sure hundreds of ‘em are gonna be jumping off the Golden Gate Bridge - but I ain't available. I ain't gay. Sorry."

And if it ever turned out that Graham was gay, I would be the first to talk about it, comment on it, joke about it, exploit it for my own literary purposes, etc.

But come on. Or better yet - and allow me to apologize for those who will get offended - eewwww.

Even if he were gay, I wouldn't date him. And I'm the one with an Evita Peron fascination.

Posted by BlackTsunami at 5:00 AM 2 comments: Links to this post