It's no secret that the anti-lgbt right simply adore Donald Trump. They view him as the person who can make all of their craven ideas of turning America into their version of a so-called Christian paradise come true. The way they defend him and his excesses are both pitiful and amusing.

Take this video of  anti-lgbt Fox News personality Todd Starnes. Starnes, who latches on to Christianity with the urgency of a "physically inadequate" man clutching a huge firearm, is not exactly a good  messenger for Christ due to his history of lying and creating phony anecdotes of persecution. Still, the following comments he made about Trump goes beyond the pale of lunacy:

“For the past eight years,” he said, “we’ve been told that we are the problem, that we are not a Christian nation, that we are not an exceptional nation. Our traditions and our values have been ridiculed and marginalized. We were mocked by Hollywood and dismissed by the academics, marginalized by the mainstream media. But all that changed on election day when a man who promised to defend religious liberty, a man who promised to make America great again became our president.” “I believe that God saw fit to give our nation a second chance. My fellow countrymen, we are surrounded, the cultural bullets are flying, the enemies of freedom are advancing and the time has come for all of us to stand resolute. You say, ‘Todd, I’m not a fighter.’ Well, there ain’t no such thing today, sonny, because we are freedom’s last line of defense! … It’s time for every gun-toting, Bible-clinging deplorable American to take a thunderous stand for life, liberty and the pursuit of happiness.”


Starnes' habit of lying and creating false narratives serves him well here. To throw a little truth in the matter, Todd Starnes is saying that God  moved the stewardship of the country from an intelligent man who worked hard for every American and attempted to create prosperity and a road to affordable healthcare to an egotistical braggart whose mental capacity is that of a crushed chia pet and whose Administration has seen nothing but chaos, strife, and confusion since its beginning and who also attempts to assuage Americans with empty promises while those working with him are attempting to destroy everything including decent healthcare, good education, and safeguards created to fight corruption and pollution.

And God did all that to allow so-called Christians to save America. Save us from what? Peace? Prosperity? Good health?

Starnes is out of touch with reality, but unfortunately he is exactly in tune with the anti-lgbt right. People like Starnes and groups who align with him (i.e. the Alliance for Defending Freedom, the Family Research Council, the American Family Association) have an inaccurate and hypocritically wrong view of America and Christianity. And nothing Donald Trump allows them to push can hide that. I would suggest that Starnes and company be aware of the statement that "God don't like ugly."

Hat tip to Right Wing Watch
Posted by BlackTsunami at 5:26 PM No comments: 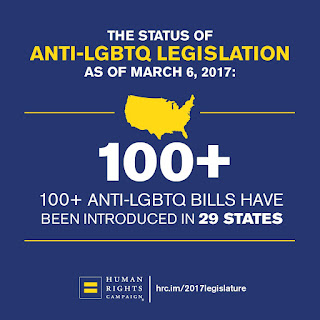 100 Anti-LGBTQ Bills Introduced in 2017 - This is how it is supposed to be. Getting equality for any group is never going to be easy. If you feel scared, go home. I got my fighting clothes on and I say LET'S ROCK, BITCHES!!!!!

Reporting On Trans Rights Supreme Court Case, Major Outlets Failed To Call Alliance Defending Freedom A Hate Group - This post by Media Matters spotlights a problem with my community. If we wait for the press to do the right thing, we will be waiting for a long while. Those ideas of the press being the saviors of justice, along with the visions of a crusading Edward R. Murrow, are now seen for what they are - illusions. If the lgbt community wants the press to cover issues of lgbt equality vs. the religious right fairly, then perhaps we have to make them. Don't wait for them to save us. Be aggressive in calling out these groups ourselves and wait for the press to come cover the conflict. Then we take hold of the narrative.

DeVos meets with LGBT groups over trans student protections - Big kudos to these groups for taking the initiative to grab the bull by the horns.

Proposed bill would ban same-sex marriage in Arkansas - Some folks are just determined to run into a steel wall at full speed.
Posted by BlackTsunami at 9:13 AM No comments: