Does Caitlyn Jenner 'make God into a liar?' Of course not!

I rarely, if all, talk about religion on this blog.

I consider myself a person of faith raised up in the Baptist Christian religion. I respect the differences of religious belief, but draw the line when folks  exploit these beliefs to harm their fellow man by lies and stigmatization, particularly my lgbt brothers and sisters.

I especially don't like it when Christians point to several "clobber verses" in the Bible as a way to demonize lgbts without taking into account what these verses are actually saying or what was happening at the time these verses were written.

With that in mind, I have to comment on this situation with Caitlyn Jenner in my own way. I don't think I have to recount the situation. She has found happiness finally being who she is.

However, there are some who call her transition an affront to God and they use those same Biblical verses to do so. They claim that Caitlyn is saying that "God is a liar" because supposedly God made male and female. Of course they say the same thing about the lgbt community in general. Rather than go into a long expository, I think I will give my opinion on whether or not God approves of Caitlyn, myself, and other members of the lgbt community by citing a chapter in the book of Job which I think says it all. 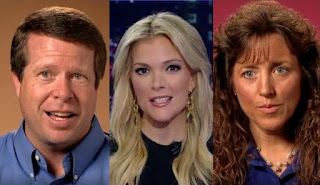 Fox News snags first post-scandal interview with Jim Bob and Michelle Duggar - Surprising NO ONE that the Duggars are running to Fox. I guess Megyn Kelly is slightly better than Sean Hannity but color me NOT impressed. Frankly I don't fall for Kelly's "I am so different than the other Fox newscasters act." So what if she comes across sensibly every now and than after showing an immense degree of bias. I don't get excited by journalists who act like they are supposed to only a quarter of the time rather than all of the time. The proof will be in the questions she asks. And by the way, where will Josh Duggar be during this interview?

20 Burning Questions Fox News' Megyn Kelly should ask Jim Bob and Michelle Duggar - Get your checklist out if you are planning to watch the interview.

Colorado YMCA has the perfect response to critics of its gay-friendly ‘alternative’ prom - And it was much nicer than anything I would have said.


New HIV Study Was So Dramatic, It Had To Be Stopped Early - This wonderful. Imagine and HIV study so successful that it was stopped in the midway point and participants get immediate access to the antiretroviral drugs used in the study.


Photo taken from The Inquisitr


Posted by BlackTsunami at 9:17 AM No comments:

"I think what we have here is – and I hate to use a term that is kind of threadbare or shopworn but – political correctness," he began, "and that is that there are certain positions that you're allowed to take in a democratic society; and then for some reason there are other positions that you're not allowed to take. And our past support for one man, one woman marriage in South Carolina somehow makes us toxic." - Oran Smith of the Palmetto Family Council


Smith is still fuming over the fact that pressure by South Carolina lgbt activists and their allies convinced Clemson coach Dabo Swinney not to attend PFC's upcoming fundraiser where he was to receive an award.

However, based who Smith chooses to tell his story to in the article, he isn't telling the entire truth.

A little advice, Oran. You shouldn't lie and try to make this situation solely about your stance on marriage equality, particularly when you consort with groups like the Family Research Council and the American Family Association who are known for demonizing the gay community with junk science studies, comparisons to the Nazi Party, and false claims that homosexuality and pedophilia are related.

People tend to see right through your weeping towel.
Posted by BlackTsunami at 5:10 AM 1 comment: