No matter how many times anti-gay groups and their spokespeople express desires for it it, what's happening to the lgbt community in Russia isn't going to happen to us here in America.

But it's still a drag to hear them make such a wish: 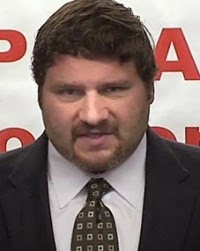 "(Homosexuality) is a very dangerous lifestyle that countries like Russia are, in addition to reestablishing and saying no, marriage is what it's always been, they're saying additionally we are going to stop this homosexual activist propaganda from corrupting children in our nation and we need to see that right here in the United States." - Matt Barber of the Liberty Counsel and "dean" at Liberty University

Related post - If Matt Barber hates gay sex so much, then why does he keep talking about it?
Posted by BlackTsunami at 2:45 PM 2 comments:

REPORT: Fox News Silent On Anti-Gay Human Rights Crises - It's relatively easy for us to be blase about Fox News' lack of journalistic integrity but something like this goes beyond the pale. Coupled with the fact that Fox News also gives anti-gay group leaders wide berths in unchallenged interviews and is the home of a propaganda artist who constantly spins lies about anti-Christian persecution (Todd Starnes), I take solace in how this network will be remembered by future generations. It won't be a good legacy to have.

New Online Safe Space for Kids with LGBTQ Parents - Excellent idea for a blog meets the needs of a group the anti-gay right will ignore and our groups don't mention enough.

Nevada Conservatives To Ninth Circuit: Marriage Equality Is Just Like White Supremacy - You have to admit that this is one hell of a bull@%$! argument against marriage equality.

Hiding behind the 'hate' label - A lesson on rhetoric. When anti-gay groups and their supporters say that they don't "hate" lgbts, we need to remind them that we don't care whether they do or don't. It's not about hatred, but their ignorance and their false sense of entitlement in that they feel they are entitled to dictate what makes a family or how they flaunt their deliberate ignorance about lgbt lives and expect not to be called on it.
Posted by BlackTsunami at 9:06 AM No comments:

Oklahoma legislator Sally Kern is infamous for her anti-gay statements, including saying that lgbts are more dangerous than terrorist, claiming that we are destroying the nation, and recently saying that homosexuality is a "civil wrong."

All in all, she represents the danger of someone who reads and processes anti-gay propaganda. However in a recent debate on News Channel 4′s Flashpoint, Scott Hamilton, Executive Director of the Cimarron Alliance Equality Center, demonstrated what happens when we match such nonsense with intelligence instead of cries of "bigot."

Hat tip to Truth Wins Out.
Posted by BlackTsunami at 5:01 AM 3 comments: