Family Research Council head Tony Perkins is sounding the alarm about a new bill because it benefits LGBTQ students:

Apparently, it's not enough that schools are indoctrinating students -- they want to brainwash teachers too! In California's public schools, where the districts have their hands full just raising test scores, it looks like the faculties will have to take time out from actual educating to master a new subject: LGBT sensitivity.

Under a new bill just approved by the state assembly, every junior high and high school teacher would be ordered to undergo training on how to support kids who identify as LGBTQ. That includes everything from referring students to activist organizations to launching school-wide efforts aimed at encouraging confusion like transgenderism. The legislation, AB 243,  (Editor's note - FRC got the name of the bill wrong. It is actually bill AB 493) passed unanimously -- 61-0, with virtually every Republican refusing to vote.

Our friends at California Family Council are horrified that anyone would force teachers to promote an agenda that the American College of Pediatricians calls "child abuse." "This mandated training," CFC's Greg Burt warns, "will put Christian public school teachers in the position of promoting and approving beliefs that clash with their biblical values. This conflict is already happening. According to information the California Family Council recently received from concerned Christian elementary school teachers, LGBTQ teacher training is already being used to shame teachers into promoting gender and sexual orientation beliefs they disagree with."


Is AB 493 as bad as Perkins is making it out to be? Of course not. When you eliminate FRC's penchant for alarmist phraseology (indoctrinating students? brainwashing teachers?) and citations from a fake medical organization which passes along junk science as legitimate medical information  (the American College of Pediatricians), one can easily see that AB 493 is simply an attempt to keep our LGBTQ kids safe while they attend school.

According to a February article in The Sacramento Bee:

Anti-LGBTQ bullying is an epidemic in California schools: 64 percent of such middle and high school students surveyed by the California Department of Education last year reported being bullied. Nearly half had seriously considered suicide.

Assembly Bill 493 is co-sponsored by Assemblyman Todd Gloria, vice chair of the California Legislative LGBT Caucus, and State Superintendent of Public Instruction Tony Thurmond. The bill would require every county office of education, school district and charter school to provide annual in-service training to all teachers grades seven to 12.

The training would focus on “strategies to increase support for LGBTQ pupils and thereby improve overall school climate,” according to the bill language.


It is ironic that FRC labels AR 493 as harmful to children seeing that the organization has in the past harmed transgender children by smearing them as predators: 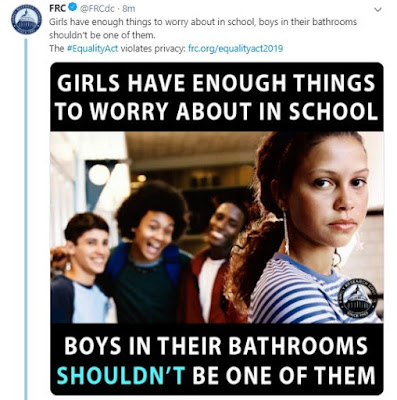 And don't even get me started about the nonsense that AR 493 would interfere with the so-called beliefs of Christian school teachers. Any school teacher who doesn't put the safety of their students first doesn't belong in any classroom, regardless of whatever religion they hold dear. 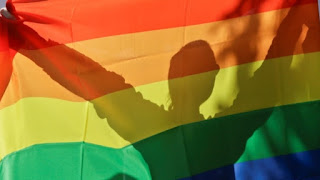 Bitter Fox News fans pitch a fit after US women and Rapinoe win the World Cup - So much for patriotism.

TED Talks organizer censors gay speaker who wanted to discuss coming out - Excuse me? I beg your pardon . . .

Lil Nas X: ‘I’m Already Getting’ Backlash For Coming Out As Gay - Stand strong, my friend.

Over 200 major companies sign Supreme Court brief in favor of LGBTQ workers - We'll see how this works out.
Posted by BlackTsunami at 8:40 AM No comments: