Anti-gay AFA doesn't know which deception to push about Washington state florist, so it pushes two 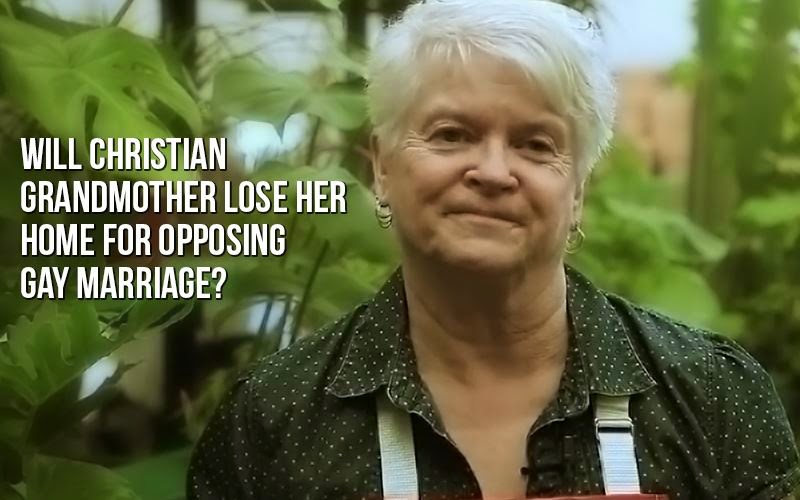 
When it comes to the case of Barronelle Stutzman, the Washington State florist who was found guilty of breaking that state's anti-discrimination laws by refusing to serve a same-sex couple, anti-gay groups had to play a quick game of message switching.

At first, she was portrayed as a Christian grandmother who was in danger of losing her home, business, and life-savings supposedly because she was "standing up her her values" against evil government officials and lgbts attempting to "make" her "participate" in marriage equality.

However, when the news came down that she actually refused to accept a settlement from Washington State's attorney general of $2001, quicker than Diana Prince would change into Wonder Woman on the 1970s television show, anti-gay groups suddenly transformed her into a person who would not sell out her values even if this could possibly, but really not proven as would, cause her to lose her life savings, business, and homes.

That's not to say though that one particular anti-gay group isn't brazen enough to push both talking points at the same time.

This afternoon, I received an email from the anti-gay American Family Association:

Barronelle Stutzman has rejected a deal by Washington state Attorney General Bob Ferguson that would have forced her to betray her religious beliefs and start providing flowers for gay weddings.

"You are asking me to walk in the way of a well-known betrayer, one who sold something of infinite worth for 30 pieces of silver," Stutzman wrote in a letter to Ferguson. "That is something I will not do."

. . . Feeling the heat from the Christian community, Ferguson had offered to settle the case if she paid a $2,000 penalty for violating the Consumer Protection Act, a $1 payment for costs and fees, and agreed not to discriminate in the future.


First of all,  the claim that Ferguson was "feeling the heat from the Christian community" and offered to settle because of it is a lie.

Gay Marriage Opponents To Rally - Now you just KNOW that South Carolina wasn't going to be left out of this wildness. Folks will be assembling at the State House this weekend to push support for "protection of marriage bills" in my state. Barring the weather, I will be there taking pictures. As for the possible success of these bills, I have tremendous faith in the statewide organization, SC Equality, in its efforts to stand for our community. The organization is hard at work even as I speak.

N.C. Senate passes anti-LGBT religious discrimination bill - Meanwhile, a bill which would allow magistrates and registrars of deeds to not do their job for same-sex couples passed. I don't see a bright future for this law.

American Family Association proclaims the Carolinas a safe, queer-free zone - According to the American Family Association's 'bigotry map,' the Carolinas (North and South) have no lgbt groups at all. Now we all know this isn't true on so many levels. On one hand, I am incredibly insulted. However, on the other, the James Bond villain in me is thrilled that our secret homosexual organization dedicated to bringing down America and having Judy Garland's birthday declared a national holiday hasn't been detected yet. This means (fake European villain accent) "no one has made me cross enough to feed them to my piranha fish."

Texas Bill Would Punish Businesses If They Don’t Discriminate - It's an old adage, but I can safely say that yes, I have now "heard everything."

Fired for Being Trans - This should NEVER happen EVER. 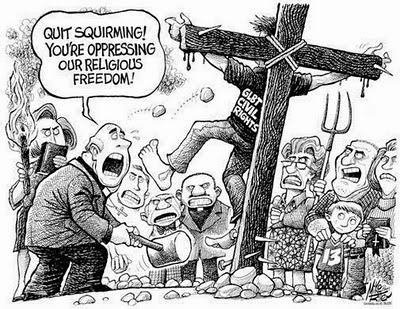 . . . the fight over gay rights continues in conservative corners of the country, where legislators are advancing laws that would, intentionally or not, ensure that gay people can be refused service, fired or evicted simply for being gay.


There are no national laws protecting against these forms of discrimination, so the matter has been left up to individual communities. A growing list of cities, for instance, are passing gay anti-discrimination ordinances, which has raised the ire of their more conservative state houses.In this year’s legislative session, similar bills in several states are striking back against gay rights.The proposed state laws fall into two categories.

Some are anti-anti-discrimination measures that would prevent a state’s cities or counties from creating protections for gay people. . . . In another, more classic category are laws that would protect people who discriminate against gay people on religious grounds. There has been tremendous legal murkiness concerning when and in which contexts religious rights trump gay rights. These religious freedom bills would have religious rights triumph, always.


Everything You Need To Know About The Gay Discrimination Wars in 2015, The Washington Post

Those who want to celebrate thinking that the lgbt community is about to win marriage equality need to get off their asses. As one war ends, another begins. So it shall be if the religious right and their allies have anything to say about it.