The National Organization for Marriage loves to push the mantra "don't mess with marriage" as a way of falsely claiming that gays want to disrupt the institution.

However, according to Think Progress, the mantra has been turned not only on NOM but others who would supports its efforts:

The GOP presidential race will shift to New Hampshire after today’s Iowa caucuses, where Republicans in the legislature and Catholic leaders have pledged to repeal the state’s 2009 marriage equality law — despite overwhelming public support for the measure. This morning, the state’s leading newspaper, the Concord Monitor, debunks the arguments against same-sex marriage and calls on lawmakers to “leave the law alone“:


• Marriage is between one man and one woman. This is more of a declaration than an actual argument. In fact, it’s a declaration of bigotry. After all, who gets to define marriage? Those already married? Without a compelling reason to deny marriage to gay people, a statement like this is hard to take seriously.

• But marriage has been restricted to heterosexuals for thousands of years. Many traditions outlive their usefulness. Slavery was an ancient practice too, after all. So was barring women from participation in politics. Once upon a time, people with disabilities were routinely locked away in institutions. Mercifully, times change.

• Marriage is for procreation. In many cases, yes. But infertile, straight couples marry all the time. So do those uninterested in having kids. Those past their child-bearing years aren’t forced to divorce. Having children isn’t the only thing that brings couples together.

• Same-sex couples don’t do as good a job raising children. There are all sorts of good parents and, alas, a wide variety of bad ones, too. Sexual orientation has nothing to do with it. Nor is there a legislative push to ban other sorts of truly bad parents – child molesters, bank robbers – from marrying. No doubt each of New Hampshire’s 424 legislators has among his or her constituents gay couples raising children just fine. Examples that disprove this worry are easy to find.

You really should read the rest of the editorial. It is a definite take down of all of the phony arguments against marriage equality

Bachmann Refuses To Explain Past Anti-Gay Comments - Come on Michele. Whatever happened to that titanium spine.

NOM, while calling us Soros-funded elites, continues to spend money like its water - Naturally NOM won't disclose anything about ITS finances. 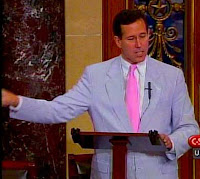 By tomorrow morning, the Iowa Republican caucus will be over and my head will stop throbbing from overkill.

The big story seems to be Rick Santorum (who probably never met a same-sex relationship or family he approved of) is moving up in the polls. I refuse to say "surging" because that term has been overused as it is.

It's looking like this uptick is due to Romney still making folks uneasy and how Santorum appeals to the so-called evangelical crowd.

And the one group who seems to be thrilled for Santorum is the National Organization for Marriage. Check out its last five posts:

Santorum on the Campaign Trail: America Needs One Marriage Law

Santorum's Fundraising Soars Along With His Poll Numbers

Santorum: GOP's Man of the Moment

Don't be fooled by NOM's "Santorum fever." He is clearly the flavor of the month (like Herman Cain, Michele Bachmann, Rick Perry, etc.,etc). Regardless of how he does in Iowa, it will be his single moment in the sun.

And when Santorum's moment is up, count on NOM to slink to the candidate in the lead while omitting it supported anyone else.

Posted by BlackTsunami at 4:30 AM 2 comments: