After spending over $2 million on a disastrous defense of DOMA, House Republicans are abandoning it. From Buzzfeed:

WASHINGTON — House Republican leaders announced in a court filing Thursday that they will not defend remaining statutes similar to the Defense of Marriage Act that ban recognition of same-sex couples’ marriages.

The move comes three weeks and one day after the Supreme Court ruled in Edith Windsor’s case that the federal definition of marriage in DOMA was unconstitutional because it banned the federal government from recognizing same-sex couples’ marriages.

“[T]he House has determined, in light of the Supreme Court’s opinion in Windsor, that it no longer will defend that statute,” lawyers for the House Bipartisan Legal Advisory Group (BLAG), controlled by House Republicans, wrote about veterans’ benefits statutes that similarly ban recognition of same-sex couples’ marriages.

“The document from the legal team speaks for itself,” House Speaker John Boehner’s spokesman, Michael Steel, told BuzzFeed, when asked for comment on the move.


You can read the rest here. But I think Boehner and company owes the American people some sort of parting gift. After all, it was our money.
Posted by BlackTsunami at 2:57 PM 1 comment: 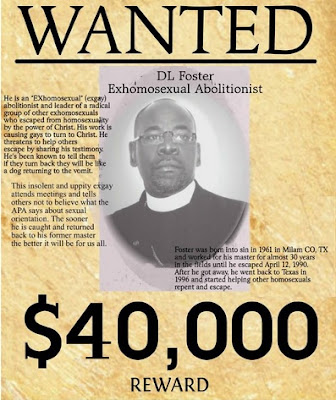 Any 'ex-gay' leader who compares himself to Harriet Tubman and creates a WANTED poster to match can't be all there. That's just my opinion. Apparently he compared himself to Jesus, too. More about DL Foster here - Ex-Gay Pride Leader: I'm Harriet Tubman and Right Wing Watch Are Slave Catcher

FRC's Sprigg admits it: ENDA opponents want 'right' to brand LGBT people as 'immoral' - Why Peter, ENDA won't keep you from branding us as you usually do. You just won't be able to use the law to codify your homophobia.

COMMENTARY: Refusing service in the name of religion is never acceptable - FINALLY, someone with a prominent position in the media is loudly voicing what I have been asking in regards to this "religious liberty" argument.

Media Outlets Are Ignoring One Of The Most Significant Non-Discrimination Bills In LGBT History - I'm sure that they will remember it enough to invite Tony Perkins to come on their shows for a one-sided inaccurate monologue about the lgbt community.

Posted by BlackTsunami at 8:55 AM No comments:

Below is the “official” promotional poster for the Folsom Street Fair, an annual, sadomasochism-celebrating street festival in San Francisco. The “fair” is notorious for its open-air perversions, mocking of religion [also see this], sadistic whippings, “master-slave” couples, and full nudity — and the latter will be allowed again this year due to an exemption granted to FSF to a new anti-public-nudity law passed by city supervisors. Words can barely convey the evil captured by this image — a rebellious wickedness that comes from glorifying sin in defiance of the wholesome boundaries for sex established by God. Folsom is also the creepy cousin of “gay pride” and “diversity” — there would be no Folsom Street Fair were there not first a “gay” revolution, with its ground zero in the homosexual Mecca of San Francisco. Click on the graphic to enlarge, if you must 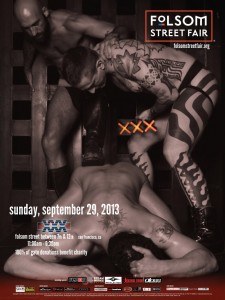 For the uninitiated, it's like this every year.  Folsom has its street fair and LaBarbera wrings his hands in abject - and fake - shock. Then he, or one of his associates, manages to show up, take pictures (omitting the heterosexuals participating in this event), and go into graphic details about what they allegedly saw. Very. graphic. details.

It used to play well in parts of the conservative media, but other than a brief media blitz on Fox, LaBarbera's sad attempt to connect this subcultural event to the larger world of lgbt activism always falls on its face.

Its no longer interesting anymore. But it's always fun to report about.

Posted by BlackTsunami at 4:43 AM 3 comments: