The big news today is about the DOMA hearing and how Sen. Al Franken (D-MN) called out Focus on the Family's Tom Minnery for his distortion of a study.

Minnery cited a Department of Health and Human Services study to make the case that children do better in a heterosexual household as opposed to a same-sex household. Franken, however, proved that Minnery had distorted the study's wording.

While everyone is reveling (with good reason) in this pivotal moment from the hearing, let's not forget one thing.

What Minnery did was not an anomaly. His distortion was not a one-time thing from a lazy employee of an otherwise honorable organization.

Maggie Gallagher of the National Organization for Marriage committed this grievance last year by misrepresenting a study of abused children.

Peter Sprigg of the Family Research Council committed the same intentional faux pas earlier this year by citing two studies, neither having anything to do with same-sex households,

And we're not just talking about studies regarding households, either.When groups like Focus on the Family, the Family Research Council, or the National Organization for Marriage aren't busy scaring people with how the gay community wants to "recruit children," they busy themselves distorting all sorts of legitimate data, creating conclusions that the researchers never intended or worked for.

We know this because at least 11 of these researchers complained about this. They include:

National Institute of Health director Francis Collins, who rebuked the right-wing American College of Pediatricians for falsely claiming that he stated sexual orientation is not hardwired by DNA.

University College London professor Michael King, who complained that the American Family Association was distorting his work on depression and suicide in LGBT individuals

University of Utah professor Lisa Diamond, who complained that NARTH (the National Association of Research and Therapy of Homosexuality), a group which also share board members with the American College of Pediatricians, distorted her research on sexual orientation.

Dr. Carol Gilligan, Professor of Education and Law at New York University, who complained that former Focus on the Family head James Dobson misrepresented her research to attack LGBT families.

Dr. Robert Spitzer, Professor of Psychiatry at Columbia University, who has consistently complained that religious right groups distorted his study to claim that the LGBT orientation is easily changeable.

And late last year, John Horgan, a science journalist and Director of the Center for Science Writings at the Stevens Institute of Technology, became the 11th researcher to complain.

These are the reasons why many of us are celebrating Franken's dressing down of Minnery. It revealed to so many what a lot of us in the gay community have known about the religious right for years - that all of their talk about "morals" and "values" and "personally held religious beliefs" are a dodge. They are a smokescreen which these organizations use to hide their deceptions.

When it comes to the gay community, the vast majority of religious right studies and data have been fallacious distortions designed to exploit fear, not educate.

It's not unintentional. These folks - Maggie Gallgher, Peter Sprigg, James Dobson, et. al. - know that when they misrepresent studies, particularly in front of Congress, they are committing fraud but they don't care as long as they can get away with it.

After today, however, it will be more difficult for them to get away with it.

Posted by BlackTsunami at 3:15 PM 2 comments:

The Congressional hearing concerning DOMA is happening now (and is probably over by the time you read this entry) and from what I understand, reports are Focus on the Family's Tom Minnery had a bad time of it. First, Sen. Al Franken (D-MN) made mincemeat of his bad reading of studies:

You think Sen. Franken reads this blog? Okay that was ostentatious but I couldn't help myself.

And then to make matters worse for Minnery, Sen. Patrick Leahy (D-VT) got him to admit that children in same-sex households (and there are a lot of them) are disadvantaged by a lack of protection for their families:

Is Grassley Hinting That Maggie Gallagher Was Too Scared To Testify Against DOMA? - While I think that it is Maggie Gallagher he is talking about, I also think her reasoning is phony. She had no problem speaking at the DOMA hearing led by Republicans earlier this year.

Ghana Regional Minister Orders All Gays Arrested - Pray for our brothers and sisters caught in the grip of this madness.

Barber: Gays Don't Want The White Picket Fence, They Want To Burn It Down - An day old entry but I haven't picked on Matt Barber in a while.

Posted by BlackTsunami at 9:06 AM 2 comments:

The National Organization for Marriage has gone over the top in it's silly attack on marriage equality in New York with its new mailer. The mailer targets several NY senators who voted for marriage equality. Here is just a sample of one: 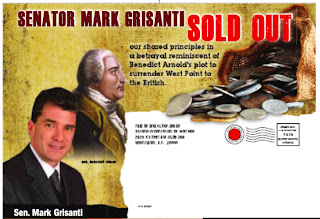 Comparing a Senator who changed his mind and voted for marriage equality to Benedict Arnold (the treacherous general who was going to turn over West Point to the British during the American Revolution) is a bit tacky and over the top, especially when one remembers who NOM flocked to the side of Maryland Rep. Sam Arora earlier this year when he decided that he was going to vote against marriage equality in that state after campaigning for the issue.

Now the second part of the mailer is the same mess we can expect from NOM - i.e. gay marriage will harm everyone's rights and will hurt children: 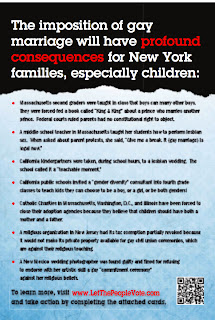 My apologies if you can't read this but that's not my fault. That is how the ad has been posted online, as if NOM intentionally made parts of it difficult to read. But allow me to read some of the claims to you (and refute them of course):

NOM claim - Massachusetts second graders were taught in class that boys could marry boys. They were force-fed a book called King & King about a prince who married another prince. Federal courts rule that parents had no right to object.

Truth - NOM's continued use of this claim demonstrates the organization's willingness to deceive. Originally NOM was claiming this:

"Massachusetts’ public schools teach kids as young as kindergartners about gay marriage. Parents have no legal right to object!"

But the organization was called out for lying by the site Politifact. So it seems that NOM has retooled this claim by use of clever semantics.  If we are to believe that children are "force-fed" ideas by simply having a story read to them in class, then I hate to think of what NOM thinks of  Hansel and Gretel or Little Red Riding Hood.

NOM claim - California kindergartners were taken, during school hours, to a lesbian wedding. The school called it a teachable moment.

Truth - NOM conveniently omits that the students obtained their parents' permission to attend this event.


NOM claim - California schools invited a gender diversity consultant into fourth grade classes to teach children that they can choose to be a boy, girl, or be both genders!

Truth - First of all, NOM is overstating the lessons for the sake of hysteria. Secondly, again NOM omitted the fact that parents were given prior notice and had to give their permission for the students to attend the lesson.

NOM claim - Catholic charities in Massachusetts, Washington, D.C. and Illinois have been forced to close their adoption agencies because they believe that children should have both a mother and a father.

Truth - Of course NOM again is not telling the full story The fact that these agencies receive tax dollars while using discriminatory practices (not allowing gay or lesbian couples to adopt) is the problem at the crux of the issue.

All in all, NOM's mailer adds up to tacky images and gross lies created to scare folks into standing against marriage equality.

In other words, business as usual for the organization.