What do the lgbt community and President Obama have in common? Those damned 'headless monsters' 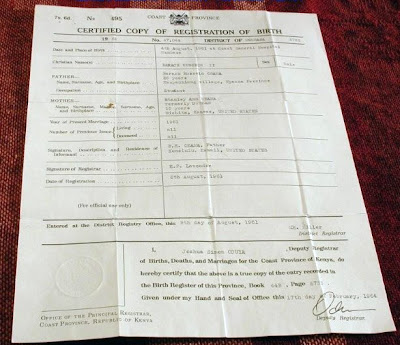 This nonsense over whether or not President Obama is an American citizen has made me philosophical.

Most specifically, the new controversy has made me philophical. This one has to do with President Obama's alleged Kenyan birth certificate:

The latest development in the Obama "birther" conspiracy is the emergence of a "Kenyan birth certificate" for the president, put online by movement maven Orly Taitz.

Oddly, the same people who are so skeptical of Obama's Hawaii birth certificate are willing to accept this new document despite many flaws, documented by the Washington Independent's Dave Weigel and Markos Moulitsas.

There are numerous flaws with this birth certificate including:

Second, Kenya was a Dominion the date this certificate was allegedly issued and would not become a republic for 8 months.

Third, Mombasa belonged to Zanzibar when Obama was born, not Kenya.

Fourth, Obama's father's village would be nearer to Nairobi, not Mombasa.

Not that it matters of course. As I understand it, those fine fiends at Free Republic are on the case to prove that the birth certificate is not a flaw.

It should make for more comedy, as if this nonsense about President Obama not being a United State citizens hasn't been funny already.

But it becomes less comical when one analyzes the entire situation in relation to the lgbt community.

President Obama has now become afflicted with that lovely thing that many of us in the lgbt community know of too well - the headless monster.

The headless monster is a belief or idea that is passed off as truth even when it has been consistently debunked. The belief's "head" or credibility has been lopped off. However, belief continues to be propped up as truth due to the insistence of a loyal group who will swear to its veracity.

These include beliefs like President Obama is not an American citizen.

Or beliefs like "homosexuality takes 20 years off of your life," or "the majority of child molesters are gay men," or "homosexuality is a dangerous lifestyle."

No matter how many times we have debunked these lies, they continue to be thought of as truth by people either too ignorant or too homophobic to accept the fact that there is nothing wrong with being an lgbt.

But while the birther mess is providing us with a laugh a minute, the constant repeititon of "headless monsters" about lgbts has caused real harm to us and our families.

So what does all of this mean? I don't know. Maybe it's something to think about the next time our community goes off on the President about not moving fast enough on our issues.

Granted, we should never slack up when it comes to getting our issues taken care of, but maybe the realization that we are all in the same boat may give us a bit of levity.

After all, us and the President are in the same boat. Let's rock it when need be but not sink it.

Posted by BlackTsunami at 3:23 PM No comments: Links to this post

Police Say They Have A Lead in Tel Aviv Killings - I haven't been out of the loop so much that I didn't hear about this tragedy. I've already written a draft of something that I want to ask religious right groups.

Judge Penny Brown: Black Church Should Be at Forefront of HIV/AIDS - Bet you won't see this item in the black media.

Another WingNutDaily Birther blooper: Kenya wasn't a republic until Dec. 1964 - Repeat after me - "The birthers are stupid and need Jesus!"

Town Hall columnist Mike Adams isn't known for his good taste when writing about the lgbt community. But I think he has gone too far today in writing about a possible hate crime that happened in July to two gay men in North Carolina.

Adams wrote the piece in what was supposed to be a satirical attack on hate crimes legislation. In pursuit of that vein, he doesn't let anything get the way of his point, such as the facts.

The original situation took place in Wilmington, NC on July 17. In early morning hours, Chaz Housand and Chet Saunders were beaten into unconsciouness by a group of thugs.

Housand suffered broken facial bones and lacerations; Saunders sustained a concussion and internal bruising, and says that his fine motor skills have been impaired. Neither remembers what happened so neither can say whether or not sexual orientation has a role in their attack.

However, there were witnesses to the attack:

Witnesses said three men had beaten the victims and kicked them when they were down.

“This is our town,” one of the suspects had said, before kicking a victim one last time and leaving, according to the account witnesses gave police.

. . .In the hours after the incident, police received multiple tips. First they got a description of the suspects’ vehicle, Blanton said. Then 911 dispatchers received a call telling police the suspects were at a home on Dapple Court.

Officers went to the residence and saw three men, who fit the suspects’ descriptions, sitting in the living room. One of them had blood on his shoe, Blanton said.

. . . Officers charged Melvin Freanthony Spicer, 25; Daniel Minwoo Lee, 21; and Jong Tae Chung, 27, each with one count of assault inflicting serious injury, according to a statement from Officer Crystal Williamson.

So why does Adams slime his way in? Apparently one of the young man who was attacked had been involved in lobbying attempts to change North Carolina's hate crimes legislation.

So, as Adams seems to imply, forget everything else. The young men probably got drunk and deserved whatever happened:

While neither Housand nor Saunders knows exactly what happened, both said they can think of no reason someone would attack them, other than their sexual orientation. I guess what they are saying is that they have easily discernible characteristics, which make them look “obviously gay.”

. . . People like Chaz Housand and Chet Saunders do need something to protect them from their own stupidity. Saunders told the local paper “I never really expected something like this to happen.” Clearly, anyone who believes he can get so drunk that he forgets much of the night in, of all places, downtown Wilmington is suffering from severe intellectual hernia.

So, let me be clear about where I stand on this issue: We should not, especially in a time of deep budgetary crisis, use public funds to protect the drunk and stupid from their own drunkenness and stupidity.

To the extent that the drunk and stupid are given protection from their own poor decision-making it should come from private initiatives. And so I’ve come up with an initiative that will save the North Carolina taxpayers from having to waste precious resources passing new, or modifying old, hate crimes legislation.

It amazes me. Rush Limbaugh and company seems to always praise conservatives for that "rugged individualism" and spirit that made America great.

I see very few conservatives embodying this image. I see a bunch of overpaid thinktank sucking hacks who really need to sit down before they ruin the public discourse any further.

I can't honestly say what happened to Housand and Saunders. But whatever the case may be, they don't deserved to be slimed by anyone, much less Adams.

Posted by BlackTsunami at 4:08 AM 8 comments: Links to this post