This is a day in which so much stuff happened that I won't be focusing on one thing. So for the first time in a long time, I am going to do an afternoon news brief post:

Court Of Appeals: Prop 8 Tapes To Remain Under Seal - Not surprising and while some on our side are upset over it, I'm not. We need to push the question just what are these folks afraid of ? For Pete's sake, the pro-Prop 8 side only had two witnesses and they sucked to high heaven. One - David Blankenhorn - even accidentally made our argument for us.

Assembly panel advances marriage bill - Good news out of New Jersey but it got crazy for a while. Well what do you expect when someone claims that there “more ex-gays than gays.”

Audio: 'There are more ex-gays than gays -- that's just a fact' - More on that silly comment.

OMG: New Hampshire Republicans may not vote to repeal marriage!! - Looks like NOM may lose in New Jersey. It looks good for us.

One Town's War on Gay Teens - Last but certainly not least, Rolling Stone magazine does an excellent job examining the awful situation for lgbtq youth at Minnesota's Anoka-Hennepin School District.

Anti-Gay Groups Abuse Campaign Finance Loophole To Shield Donors In Minnesota - You mean the National Organization for Marriage is engaging in the abuse of campaign finance laws? Don't you have to follow laws in order to abuse them?

Minnesota Hate Group Lists Major Donations From Catholic Church & NOM - Speaking of which, if monies I was giving to a church went to this mess, I would raise some serious hell.

Anti-Gay Group Calls For Boycott Of JC Penny Over Ellen DeGeneres Partnership - Cause apparently this will make children gay? I wouldn't be surprised if they pushed that argument.

The Power of Telling Our Stories Demonstrated: Washington’s Senate Ignored NOM’s Threats and Passed the Marriage Equality Bill - The perfect antidote to homophobic mess not only with marriage equality but in every situation.

NOM gets blasted on its blog for lying about military chaplains 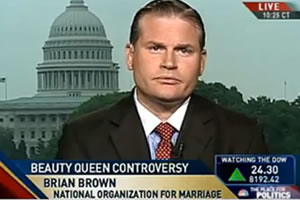 Recently, the National Organization for Marriage's president, Brian Brown, put up the following on the group's blog:

Last April, the Navy issued new "sensitivity training" guidelines that required Navy chaplains to perform same-sex marriages. Thanks to leadership from Congressmen Tim Huelskamp and Todd Akin, the Navy backed down and rescinded the guidelines.

Of course this is a lie. The letter actually said chaplains can choose to perform these marriages. They are not required to.
This deliberate lie was noticed by several bloggers. Rob Tisiani of Box Turtle Bulletin said the following:

This falsehood is now up on NOM’s blog, where I’m banned from commenting. I invite you — ask you, beg you, beseech you — to go there and point out the truth to NOM’s readers. They won’t believe it (they might not even get to see it!), but that doesn’t matter: there’s something to be said for telling the truth just for the sake of telling the truth.

I am also barred so I couldn't respond. NOM  consistently bars commentators from its blog who make it a point to challenge the group on its lies, even if the challenges are done in a respectful manner. However apparently a lot of folks who aren't barred took it upon themselves to tell NOM  that Brown's claim is a deliberate lie. Some of the comments are as follows:


Brian - Perhaps you should show us this REQUIREMENT for chaplains to perform same sex weddings. No pastor has every been required to do so and you know it. While gay marriage never made it into the 10 commandments, I'm pretty sure lying did. How do you reconcile this?
"Required" is not a synonym for "allowed."
NOM caught lying again, at this point it's redundant.
Liar Liar Liar they are NOT required to perform them there is a moral exemption clause in the general order.
I think the policy should be that Brian Brown should get his facts straight. That's a joke--I know I'm not answering your question. Seriously though, this type of flagrant inaccuracy is unacceptable at any level, especially for the president of a national organization. NOM supporters, you should demand the truth. After all, you're the ones giving away money.

Interestingly enough, one of the few comments in support of Brown's post doesn't exactly help NOM's sweetness and light image:


I called and made another donation to NOM. We ask a lot of our military, having to worry about someone staring at their backsides should not be one of them.

I guess you can't be shocked when trash attracts trash.  If you feel inclined, go to NOM's blog post and remind the organization that lies in the name of God are still lies.

Posted by BlackTsunami at 4:45 AM 4 comments: