THIS is how you handle a misconception, particularly one that your opposition exploits. You don't ignore it. You don't sidestep from it. You take it head on.

A new video campaign is bringing together transgender and gender-nonconforming activists from around America to reflect on the current state of political and social life for the trans community, as well as the complexities and nuances of the subjects’ own personal identities. Called “Trans 102,” this first episode of this series focuses on bathroom access for trans and GNC people, a contested issue in the current political climate surrounding anti-queer legislation such as House Bill 2. “Trans 102” features a number of recognizable trans movers and shakers, including activist Jenn Richards of “I Am Cait” fame.

Posted by BlackTsunami at 5:47 PM No comments:

Lesbian Couple Still Facing Harassment Thanks to Sweet Cakes - This couple did nothing but stand up for their rights and are still catching hell for it. Meanwhile, the offenders are scooping up money and attention by the handfuls via playing the victims with the anti-lgbt industry behind them. Will the lgbt community ever learn - "He who controls the narrative makes the rules."

The hate keeps coming: Pain lingers for lesbian couple denied in Sweet Cakes case - The above post provides a quick view of the mess. This article is a long, detailed telling of the mess.

Gary Bauer: Trump Administration Will Give 'Key Positions' To Religious Right - All of you lgbts whining about Clinton, let me put this post in another fashion. Gary Bauer worked in the White House during the AIDS crisis and he was one of the main folks blocking Surgeon General C. Everett Koop from getting Reagan to talk about it. His actions made the crisis worse. Now you all can get angry at Clinton for comments she made at Nancy Reagan's funeral, but it seems to me that when a man who helped further the AIDS crisis vouches for a presidential candidate, we should do what we can to keep said candidate from setting one foot in the White House.
Posted by BlackTsunami at 9:19 AM No comments:

Lifting the ban on transgender soldiers - Anti-lgbt industry vs. reality

I'm rather surprised at the muted response of the anti-lgbt right to the news that the Obama Administration is lifting the ban on transgender men and women serving in the military.

One would think that they are so busy scaring people about bathrooms that this particular news caught them by surprise. However, never fear. I can always count on the American Family Association's fake news service, One News Now, for a biased and very uneducated take on the subject. Look at their poll for example: 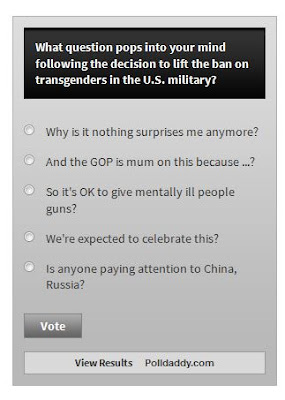 And this little nugget of nonsense is accompanied by a column by Bryan "gays were the founders of the Nazi party" Fischer, who has no expertise in military intelligence.

By contrast, the following video provides the facts we should know, including:

This isn't some type of social experiment. Seems to me that the lifting of this ban was way over due. Transgender men and women are fighting for our freedom, therefore they deserve the right to do it openly, with all of the benefits and support we can give them: