Barring something incredible happening, this will be my last post of 2010 for my blog. 2010 has been a fun ride and we got a lot of stuff accomplished for our community. I want to end it all on a happy note with this latest edition of Know Your LGBT History, my series looking at the history of lgbt portrayals on television and in the movies. Enjoy today's edition and past editions. Can you believe that I am almost at 100 episodes? I apologize in advance for any broken links.

Some Like It Hot (1959) is a classic and one of my favorite movies of all time. Directed by the legendary Billy Wilder and starring Jack Lemmon, Tony Curtis, and the one herself, Marilyn Monroe, it is a comedy about two musician who happen to witness the murder of a group of mobsters.

To escape the killers, they run away from the city and take refuge in an all-girls band, disguised as women. Hilarity ensues as Lemmon gets engaged to a millionaire and Curtis falls for the lead singer of the band, played by Marilyn Monroe:

The film has been acclaimed worldwide as one of the greatest films ever made. In 1989, it was selected for preservation in the United States National Film Registry by the Library of Congress as being "culturally, historically, or aesthetically significant," going in on the first year of voting.

In 2000, readers of Total Film magazine voted it the eighth greatest comedy film of all time. In 2002, Channel 4 ranked Some Like It Hot as the fifth greatest film ever made in their 100 Greatest Films Poll.

The only problem I have with Some Like It Hot is the fact that Monroe should have gotten an Oscar nomination. If anyone ever wonders why Monroe is a legend, show them this film.

But the part that almost everyone remembers about this movie is the ending. Lemmon has to break the news to a millionaire that they can't get married because he is a man. But the millionaire doesn't seem to mind:


Past  Know Your LGBT History Posts:

Posted by BlackTsunami at 9:28 AM 2 comments: 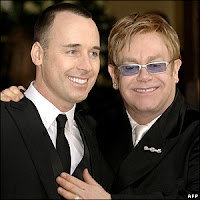 The news that Elton John and his husband of 12 years, David Furnish, are the fathers of a baby boy via surrogate received congratulations from many circles.

That is except for the rabid wolves, bloodsuckers, harpies, orcs, and ogres at the right-wing site Free Republic. They aren't exactly happy about the news. On the Free Republic newsboard, responders left many homophobic comments.

Some were as follows:


Believe it or not, those were some of the more polite comments.

I know you want to get angry at this, but don't. I posted this to provide some perspective as we pivot from 2010 to 2011.

In the long run, the folks on Free Republic are a bunch of sad creatures who can't cause any harm except probably to their fingers with the enormity of nonsense they type.

They are a perfect example that unfortunately in some circles, homophobia will always exist just like racism and other forms of prejudice will always exist. We will probably never conquer it.

But the important thing is that we don't let it conquer us. 2010 was one of the best years I have seen for the lgbt community and if God is merciful, 2011 will be better.

When push comes to shove, let the ignorant people talk and whine. Let's continue to move forward as a people because no matter how much they talk, they can't stop us. We have survived worse and we are still here.

And when the folks at Free Republic dry up and blow away (or get a crucifix branded on their chests, shot by a silver bullet, have a stake embedded in their hearts, get chased away by holy water, whichever), we will still be here.

Posted by BlackTsunami at 4:44 AM 3 comments: