Recently, author (I guess I have to call her that) Ann Coulter defended presidential nominee Rick Santorum for comments he made about the difference between being black and gay.

And amazingly enough, she actually took it upon herself to defend black people as only Ann Coulter can - i.e. putting down another group of Americans:

I'm sick of people comparing gays to blacks. No, it's very different. What Santorum said is true. It's sexualization of the military. It's not someone being Black. Tell me how being Black is like being gay. You can see someone is Black. You can't see someone is gay and the precise policy we're talking about is whether they can go around announcing they're gay."

I never thought it was possible but as a black man AND a gay man, I am offended by Coulter twice as much rather than singularly.

Rather than go into an expository about being black and gay, I think it would suffice that folks look at the source when it comes to such a comment. Furthermore, someone should tell Coulter that simply because she may have gone out a few dates with Jimmy "J.J." Walker" does not make her an authority on the black community: 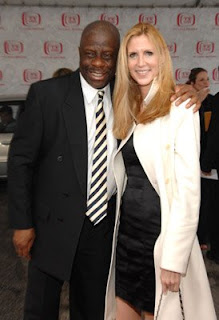 Furthermore, I think the black community can get along just fine without being "defended" by someone like her. Lastly, someone should inform Coulter that she is not a "down sista," no matter what the following clip from The Boondocks may portray her as (parental guidance suggested) :

Posted by BlackTsunami at 3:27 PM 2 comments:

'Glee part of a huge gay conspiracy?' and other Thursday midday news briefs

Tony Perkins Blames Gays For The Economy - Well why not?He blames us for everything else.

Fundraiser to aid GOP backers of N.Y. gay marriage - And it raked in over a million dollars. Betcha NOM won't talk about it.

Thank you Maggie Gallagher for revealing your lies

Former chairwoman of the National Organization for Marriage, Maggie Gallagher, recently let the cat out of the bag so to speak when she chose to praise the Family Research Council during the "Values Voter" Summit:

GALLAGHER: I want to pause and say I know all of the organizations involved in this fight, and I treasure fighting with each and every one of the people on this panel, the organ – the Family Research Council, and others.

Equality Matters breaks down why this admittance is significant:

Gallagher’s decision to single out the Family Research Council (FRC) – the organization that hosted the Values Voter Summit at which Gallagher was speaking – is worth noting. The group has been labeled an anti-gay hate group by the Southern Poverty Law Center (SPLC) for promoting smears about the LGBT community. Indeed, SPLC urged public figures attending the Values Voter summit to stop associating with anti-gay groups like FRC, which work to “create a climate of hate and violence against the LGBT community.” A recently released SPLC report documents FRC’s history of promoting anti-LGBT smears and propaganda, including depicting gay men as mentally ill child molesters

. . .  If Gallagher truly “treasure[s]” her relationship with FRC, it’s safe to assume that she doesn’t see this kind of hate speech as particularly problematic. In fact, NOM has criticized the SPLC for labeling FRC as a hate group. Both Gallagher and NOM president Brian Brown signed a statement last year condemning the SPLC for its “hateful rhetoric” and “character assassination” efforts against FRC.

In other words,  Gallagher's admittance puts a huge hole in her schtick. Those who have heard Gallagher espouse her views against marriage equality are familiar with her con game. She can't complete one sentence without implying that how folks like her are "unfairly labeled a bigots because they simply believe that traditional marriage is the joining of the two halves of humanity."

Gallagher has managed to ride that tired old argument into a bit of success against the gay community and some national face time. And the talking point is also useful in the fact that its basic dishonest drives some gays to distraction while Gallagher nonchalantly wraps herself up in the cloak of false victimhood like an aggressor hitting someone with a large rock and then assuming an innocent pose when investigated.

But it's a nasty lie which Gallagher has now exposed thanks to her eagerness to kiss up to FRC. Gallagher has revealed that NOM is a fraud. It's not about values or morality. The organization is nothing more than the same old rotten homophobia encased in new wrapping paper and given a neat bow.

Read more »
Posted by BlackTsunami at 4:52 AM No comments: