A prominent gay conservative got married recently and as you can tell by my retweet, I'm not necessarily ready to throw the rice:

Mr. Benson helps to edit a site - Townhall - which regularly smears the #LGBTQ community. Writers there have slammed marriage equality. I hope Mr. Benson enjoys his life while making sure the rest of the LGBTQ have problems enjoying ours. https://t.co/OG98lQJcoF
— Holy Bullies (@holybullies) September 12, 2019 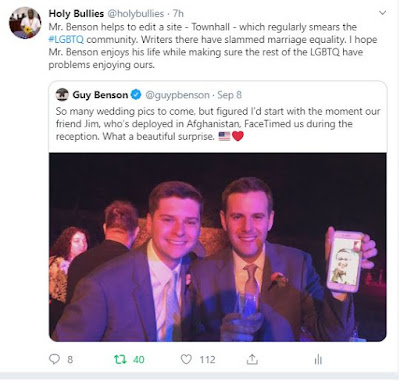 Guy Benson is an openly gay conservative writer who contributes to Fox News network and is also political editor of the site Townhall.  He recently married his boyfriend, Adam Wise.

Let me repeat that last part. He is a contributor to Fox News - the network whose anchors have given anti-LGBTQ groups uncontested platform time via softball interviews.  That is when they aren't demonizing and misgendering the transgender community, lying about Trump's horrible anti-LGBTQ record, or helping to plant the idiotic notion that LGBTQs are attempting to "sexualize" or "groom" children.

And then there's Townhall, home of writers such as

Ben Shapiro: No, the gay rights movement and the broader American left celebrated the same-sex marriage decision in wild fashion because the decision established two fundamental notions: First, that government has replaced God in the moral pantheon of the United States; second, that the new god-government has the power to root out and destroy any God-based institutions, destroying the social capital and fabric that holds together the nation.

Dennis Prager: Virtually every week, there seems to be another issue that preoccupies the country. But while our attention is focused on President Donald Trump, Google, Charlottesville, Russia, impeachment, Jeffrey Epstein, the next elections, racism, a trade war with China, the #MeToo movement or something else, LGBTQ organizations are quietly going about their work dismantling ethical norms, making a mockery of education, ruining innocent people's lives and destroying children's innocence.

and John Hawkins: Gay scoutmasters would be more likely to molest Boy Scouts: There's a lot of back and forth on whether gay men are more likely to be pedophiles than heterosexuals, but in the end, it really doesn't matter very much when it comes to the Scouts. Why is that? Because a teenager in the Boy Scouts shouldn't be spending a lot of alone time out in the woods with someone who could potentially be attracted to him. This is so basic we don't even think about it when teen girls are involved. If a thirty year old, strapping male P.E. teacher took a group of 15 year old cheerleaders out in the woods, their parents would GO INSANE. Incidentally, they'd be right to be upset. Similarly, a gay man has no business being in the woods with a bunch of teenage boys. In fact, if the Boy Scouts ever allowed gay Scoutmasters in their organization, it would kill them as dead as Disco because most parents don't want their child spending a lot of alone time with an adult who could be sexually attracted to him. In fact, that is so obvious it's clear that the people pushing this idea the hardest are primarily concerned with destroying the Boy Scouts, not enabling "gay rights."


These columns were published after Benson became editor. In the spirit of being a "conservative," he aided and abetted  this mess.  And in the spirit of "tolerance," the LGBTQ community is supposed to be silent. We are supposed to take this abuse like Celie in the The Color Purple before she found her sister's letters

Call me intolerant if you want, but I refuse to celebrate the wedding of a gay man who gets his coins by creating a platform for lies about gays  destroying religion, ruining lives, and recruiting children.

In a cushy interview with Buzzfeed after he came out, Benson said the following:

“Gay rights is not something that dominates my attentions — or my passions . . ."


No shit.  Benson doesn't have to worry about gay rights. He's upper-middle class, white, and male. He is insulated in a world which simultaneously kisses his ass and rewards him for simply existing.  We are all generally defined by our experiences in life. But in Benson's case, he is defined by his lack of experiences and not only that, is made to feel that his privilege is something he earned instead of being born into. It's a totally different reality than being a transgender woman being attacked while minding her own business or a young gay man or lesbian being bullied to the point of wanting to commit suicide.

Don't get me wrong. I don't wish Benson or his husband any ill will. They deserve happiness, as we all do. However no one should ignore that Benson owes his income to creating circumstances which undermines the ability of the rest of the LGBTQ community to be happy.

And that his marriage is due to the efforts of people who Benson gets a very nice paycheck for helping to disparage and smear.

Posted by BlackTsunami at 5:11 PM No comments: 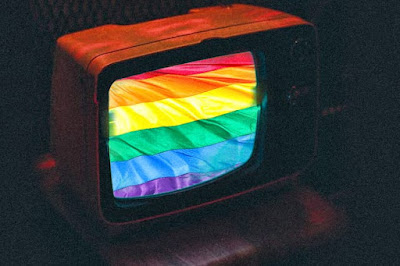 Must-See TV for LGBTQ Viewers in Fall 2019 - Take some notes.

Wash. florist returns to Supreme Court for right to refuse service to gays - Guess who's back. And her case is a bit more flimsy this time.

‘Trans bathroom bill’ author elected to Congress in North Carolina special election - Ugh! Another one in Congress.
Posted by BlackTsunami at 8:31 AM No comments: