If you want to get a handle on why there is so much ignorance about the transgender community (and how that ignorance was parlayed into an exploitation of fear which led to the loss in Houston), one can turn to the anti-gay hate group, Family Research Council.

I will spare you the vile crowing FRC president Tony Perkins made about the defeat of HERO in his email. Unfortunately, however, buoyed by that victory, he chose to push more ignorance about the transgender community via an attack on a transgender child in Chicago. And that's something I need to bring attention to:

In one Chicago school, girls are getting a lesson in anatomy their parents never bargained for. In the latest chapter of madness at the Department of Education, the federal government is ordering Township High School to allow an adolescent boy full access of the girls' locker room because he "feels" female. And by "full access," we mean the ability to strip down in the company of young girls and parade around nude.Using Title IX of the Civil Rights Act to justify this outrage, the DOE is forcing impressionable girls to experience the fear and discomfort of sharing facilities with a naked boy. Two years ago, when the issue first surfaced, the school district rejected the idea flat-out. Then, when the family filed a legal complaint, administrators tried to accommodate the teenager by hanging a curtain in the locker room where he could undress.

Even that was "too discriminatory." One of the boy's advocates, an LGBT activist at the ACLU, insisted that he was being grossly mistreated. "It's not voluntary; it's mandatory for her. It's one thing to say to all the girls, 'You can choose if you want some extra privacy,' but it's another thing to say, 'You, and you alone, must use them.' That sends a pretty strong signal to her that she's not accepted and the district does not see her as a girl."

Obviously, the district doesn't see "her" as a girl, because he isn't one!


Perkins makes the child out to be an exhibitionist and is deliberately omitting several important points about this situation. His piece clearly links to an article in U.S. News and World Reports which includes the following details Perkins chose to ignore, including:

The transgender student has not been identified and wants to remain anonymous, according to the American Civil Liberties Union of Illinois, which helped the girl's parents file a complaint more than two years ago. She has been living as a girl since middle school, has changed her legal name, obtained a passport as a female, received a diagnosis of gender dysphoria and is taking female hormones, according to the Department of Education's summary of its investigation. . . . The school district has allowed the student to use girls' restrooms and participate in girls' athletics. She is identified as a female in the district's computer system.


Gender dysphoria is a complicated condition which affects many children. It is not a mental illness and it has nothing to do sexual thrills of any shape or form. According to Medscape:

Gender dysphoria is a diagnosis that refers to people whose gender at birth is contrary to the one they identify with.


This girl is no threat to other girls. For Perkins to be so flippant about a serious medical issue and imply that this child is an exhibitionist is simply inexcusable.

But very deliberate on his part. He could care less about what gender dsyphoria is or how it affects children. All that matters to him is that he continues the game of scaring the public by conjuring up images of "predators invading girls restrooms and showers."

It's sad but not surprising. Perkins and his group doesn't think that adult lgbts are actual people with families and normal lives. Why should they  feel any different about lgbt children?


Houston Voters Reject LGBT Anti-Discrimination Rule After Heated Battle - GREAT article. We may have lost this battle but we WILL win this war.


How Transphobia Killed Houston’s Shot At LGBT Protections - Details you may cringe about reading but need to know.

How Houston Was Lost: Prop 8 Redux as LGBT Rights Are Put on the Ballot - And the warning. Heed it . . .

California Civil Rights Coalition ready to fight following Houston LGBT vote - Because the same "no men in women's bathrooms" #@!# they pulled in Houston is coming to California. What are you prepared to do before it hits YOUR town?

Runyan out, according to preliminary projection; Duvall, Smith in runoff - And, you probably won't hear about this anywhere else, THIS is how Columbia's lgbt community helped dismiss a councilman who betrayed us.


VIRGINA: Long-Haired Homosexual Men In Warehouses Defeat Anti-Gay Crackpot Eugene Delgaudio - And an EXTREME anti-gay crackpot lost his long-held seat in Virginia.
Posted by BlackTsunami at 8:56 AM No comments:

Fear rules in Houston, but the lgbt community will take the throne eventually 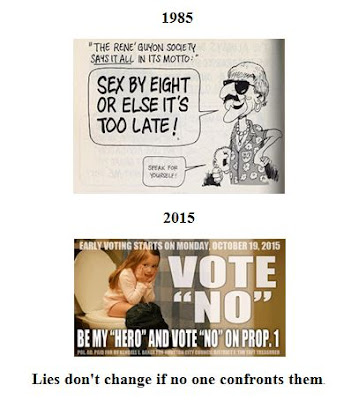 They say "cash rules all," but in Houston last night, fear stole the throne:

Houston voters struck down a non-discrimination ballot measure Tuesday, delivering a blow to the lesbian, gay, bisexual and transgender rights movement that had campaigned heavily for passage.vProp. 1, known as Houston's Equal Rights Ordinance, would have barred discrimination on the basis of race, age, military status, disability and 11 other categories in a variety of areas. (Religious organizations and institutions would be exempt from the requirements.)  It was HERO's protections on the basis of sexual orientation and gender identity, however, that attracted the most attention and made the ballot measure the center of the LGBT community's efforts this election.

. . . Conservative activists -- who were heavily outspent by LGBT advocates -- dubbed Prop. 1 the "bathroom ordinance" and adopted the slogan "No men in women's bathrooms," playing up fears that passage could lead to male sexual predators dressing up as women and entering women's restrooms. This factually dishonest message proved to be incredibly effective: Many Houston voters seemed to think the measure was solely about access to restrooms and were unaware of the broader nondiscrimination protections in the measure. The most recent TV spot released by the anti-Prop. 1 coalition Campaign for Houston, for example, showed a man entering a bathroom stall with a young girl.


And that, my friends is what the anti-gay industry is all about. We hear them talk about Scriptures, morality, and values. But in the end, the only thing they know how to do is conjure fear and lies to stoke homophobia. And why should they stop? It's very effective.

In the 70s, former beauty pageant queen Anita Bryant led the charge to defeat a non-discrimination ordinance in Florida by claiming that gay men will recruit children. In the early 80s, discredited researcher Paul Cameron helped defeat one in Nebraska by falsely claiming that a gay man mutilated a young boy in a restroom. And these are just two of so many examples.

Throughout the annals of anti-gay politicking, you will always find a conjuring up of images of oversexed gay men, violent lesbians, confused bisexuals, and oddball transgender folks looking to convert, harm, or "recruit" children. It's their main bread and butter. Whether subtle or direct, that is always one talking point which will be in the center of almost every fight against any form of lgbt equality.

So it's like this. We ain't getting around it. I don't care what focus groups say or highly paid consultants say. We can't sidestep this. We can't ignore it. It won't bounce off our chests. It never does.

We have to address this as well as other bits of propaganda the anti-gay industry uses to exploit the fears of the public. And we had better figure out a way soon because as we all know via the fight for marriage equality, once they get a successful talking point, they tend to use it in other fights.

So expect to hear the mantra of "no men in women's bathrooms" again and in other parts of the country.

The "honeymoon period" generated by the complacency our community went under since we won marriage equality is over.

Personally, that's just fine with me because I've always believed that anything worth having is worth fighting tooth and nail for. So I have one message for the anti-gay right and their lies.

Editor's note - Educate yourself on anti-gay propaganda by reading How They See Us: Unmasking the Religious Right War on Gay America
Posted by BlackTsunami at 4:57 AM No comments: