If one want to make a case for the laziness of the American media, one can easily point to how Donald Trump's betrayal of the LGBTQ community hasn't been spotlit as an issue as much as it should be.

Granted, the vast majority of us knew that he wasn't being truthful when he sent out tweets and statements claiming that he is an ally and would fight for us: 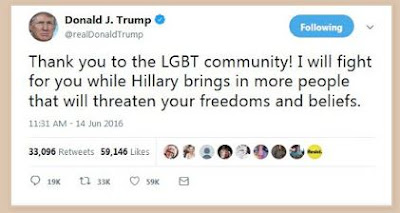 or when he showed his supposed support of our community by unfurling an LGBTQ flag during a 2016 rally; something which got him a good bit of positive press. 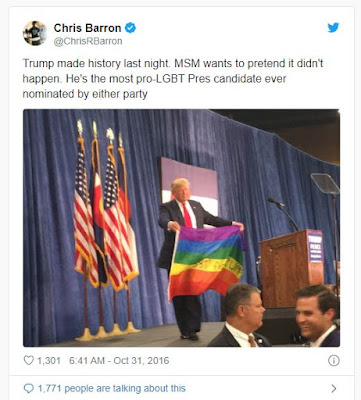 Before and after the 2016 Republican convention,  some of the media gushed about him being an ally. The LGBTQ community chose not to believe Trump and did not support him in large numbers in the 2016 election. But that is irrelevant.  It doesn't give him an "out."  He was elected as "President of the United States," not "President of the United States except for the LGBTQ community." Whether we voted for him in a mass number or not, it is his duty and responsibility to own up to what he promised to do for us.

But from actions such as:

banning transgender men and women from serving in the military based upon false rationale,

pushing a bogus "conscience protection" rule via HHS which would have had detrimental effects on LGBTQ health, or

supporting a policy which would allow religious-based foster care and adoption agencies to discriminate against the LGBTQ community and still be allowed access to tax dollars,  Trump did a 90 degree turn and has become the most anti-LGBTQ president in history. He's embraced the anti-LGBTQ industry and opened up the doors of his Administration to them and their lies  and "coded language" about "freedom" and "religious liberty."

Because no one has pressed the issue, he has silently but successfully disavowed the LGBTQ community, as if he never promised to be an ally.  He doesn't even attempt to fake progress with us as he does with the African-American community.  Donald Trump's unashamedly open betrayal of the LGBTQ community is an issue central to the dishonesty of his joke of a presidency. And it's not the media's job to be nonchalant or blase about it.

He should be asked about it at least more than once.

Posted by BlackTsunami at 5:15 PM No comments: