The above is a short paragraph which was not derogatory or obscene in any way. And it is factual.

It's too bad that the American Family Association won't publish it as a comment to a ridiculous column written by Bryan Fischer.  The column, Liberals Inconsistent About Fining Behavior, is yet another tirade by Fischer against the lgbt community. The main gist is this part:


The justification for banning cigarette smoking in public places is that innocent bystanders will be forced to breathe in secondhand smoke. But that risk does not exist with smokeless tobacco.

But using their own logic, the logic of moralistic liberals who fancy themselves the smartest people in the room, we should start fining people for engaging in homosexual sex.


And as you can see by my above comment, Fischer lists several distortions to back up this ridiculous theory. In my blocked comments, I gave a brief correction of these distortions. However since AFA has chosen to block this correction, I will give more details regarding Fischer's distortions.

Lie 1 - According to the International Journal of Epidemiology, active participation in the homosexual lifestyle can knock 8-20 years off a man’s life expectancy, and reduce it to what it was in 1871.

Truth - Fischer uses an old religious right lie. He distorted a 1997 study on HIV. We know this because in 2001, the authors of the study complained about how their work was being distorted to claim that gays have a short life span.

Truth -  Some of the topics listed in the GLMA link Fischer mentions aren't even health risks (such as Coming Out to Your Doctor and Fitness - Diet and Exercise) and in several places, GLMA does refer to homophobia and lack of a good support system for the health risks which may plague gays and lesbians (please note that the GLMA link talked about lesbian health, also. Fischer didn't mention that because he seemed to have been consumed with talking about "sodomy.") The important thing is the GLMA link is merely a guide to positive health for gays and lesbians and in no way attacks their orientation.


This is not the first time Fischer and the AFA have been caught demonizing lgbts and I doubt that it will be the last.

Fischer's column and the blocking of my correction of his lies is something we should all remember because it is  the center of the anti-lgbt propaganda hate groups like the American Family Association and folks like Fischer use. This propaganda aids the religious right tremendously as they undermine lgbt equality by passing  awful statewide "religious liberty" laws or painting transgender men and women as predators. They spend a considerable amount of time branding us as the other, exploiting people's fears and ignorance about what we allegedly do sexually to each other or want to allegedly do to children. Then they play the victim when we make moves to exercise our rights, such as the one to marry.

We are targeting them, they say. We are trying to shut them down.

Okay Bryan Fischer and the American Family Association, if lgbts are the bad guys, then why are you the ones telling lies?
Posted by BlackTsunami at 3:43 PM No comments: 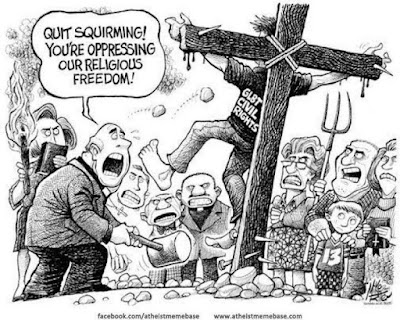 Local clergy think Missouri "religious freedom" bill only protects a hijacked version of faith that's used for political grandstanding - In the talk of these vile religious freedom bills, you notice how clergy who oppose them are hardly ever interviewed. They should be because their voices are equally important.


ATLANTA: Federal Hate Crime Charge Considered After Man Pours Boiling Water On Gay Couple [VIDEO]- As well it should be. The incident was hideous.

In this day and age when good leaders are hard to find and those we have chosen as leaders (and pundits) are grabbing for the money instead of emphasizing simple honesty, let's recognize a man who should remind us all what a good public servant once was. Leader, speaker, organizer, chief coordinator of the 1963 March on Washington, posthumous Presidential Medal of Freedom recipient, Bayard Rustin.