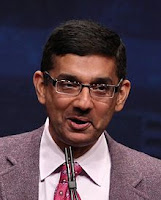 Did you know that Dinesh D'Souza, the author two vicious anti-Obama books and that ridiculous movie Obama 2016 is not in favor of marriage equality either?

In 2008, he published a piece entitled Gays Rights vs. Democracy, in which he maligned marriage equality with diatribes like such:

. . . states have a legitimate right to define marriage. State legislatures, drawing on tradition and appealing to the values of their constituents, have defined marriage in a very particular way. Marriage requires a) two people who are b) of legal age and c) not closely related to each other who are d) one male and one female. Note that this definition excludes people who want to marry children, or guys who want to marry their sisters, or Muslims who want to take four wives, or that strange guy who wants to marry his dog.

Now gay activists, with the acquiescence of the California high court, want to remove one of the criteria of marriage while keeping all the rest. Yet if it’s discriminatory to gays to require that marriage be between a man and a woman, why isn’t it discriminatory to Mormons and Muslims to require that it remain between two people? Isn’t incestuous marriage also between “consenting adults” who have a right to equal protection of the laws? And why doesn’t the Fourteenth Amendment protect the fellow who wants to walk down the aisle with his poodle on the grounds that “I love my dog and my dog loves me”?

The point is not that gay marriage is indistinguishable from child marriage or polygamy. The point is that any definition, and marriage is no exception, includes some people and excludes others. Consequently it’s unreasonable to say that gays have a constitutional right to over-ride the definition but other groups do not. The court’s real justification seems to have little to do with constitutional reasoning and everything to do with an assertion of political power.

Now why am I bringing this up? Simply because recently, D'Souza reportedly attended a Christian conference with a young woman who he introduced as his fiance.

Nothing wrong with that, except that it was news to everyone who knew that D'Souza has been married for 20 years to a woman named Dixie.

Sarah Posner gives the rest of the details:

According to WORLD’s Warren Smith, D’Souza, whose $10,000 per speech honoraria places him in the “top tier” of Christian speakers, was in South Carolina to speak at a Baptist church, which was hosting “high-profile Christians speak on defending the faith and applying a Christian worldview to their lives.” (Cue guffaws here.)

Smith describes one conference organizer, Alex McFarland, being “distressed” at the behavior of their celebrity speaker. According to Smith, D’Souza told McFarland that he had “recently” filed for divorce, although Smith found in court records that D'Souza filed for divorce about a week after the South Carolina conference took place.

D’Souza is also the president of The King’s College, and Smith reports that he's expected to be under scrutiny by the school’s board over this incident. (Smith’s boss, Marvin Olasky, resigned his post as TKC’s provost shortly after D’Souza was named president in 2010.) After TKC began looking into the matter, D’Souza texted Smith: “I have decided to suspend the engagement.”

Don't you just love it when anti-gay hypocrites fall on their faces. Dixie! Don't take him back! Take half of his money!

Posted by BlackTsunami at 4:22 PM 4 comments:

Wow! Homophobe Bryan Fischer gets destroyed on CNN. This is what happens when folks like Fischer get challenged on their rhetoric.

New NOM-branded video equates marriage equality with drug dealing, incest, and pedophilia - And we are surprised why?

Iowa: Homophobic misogynist pastor wants to slap woman for objecting to his anti-LGBT activism - If that pastor EVEN HINTED this sort of thing in my church, there would be a rumble which would make Armageddon look like a tea party. And yes, I would get some shots in if it was MY mother he said this about.

Posted by BlackTsunami at 9:05 AM 2 comments:

I believe that the correct term for this is BUSTED!

From the group American Equal Rights comes proof that the forces seeking to stop marriage equality peddle the same lies over and over again:

These videos are highly important because they signify that we are catching on to the lies of the anti-marriage equality forces.

Our ability to spot their phony arguments are getting stronger.

And they are running out of phony argument.

Posted by BlackTsunami at 4:57 AM No comments: