There is no such thing as "trans strippers in schools," but far right personality Christopher Rufo wants conservatives to start using that phraseology instead of talking about "drag queen in schools."

This is what I said about Rufo in a past blog post:

To the luckily uninitiated, Christopher Rufo is the newest homophobe on the block. That's right. Move over Peter LaBarbera, Linda Harvey, Matt Barber, Ryan T. Anderson, and every other bigot we've vanquished because Christopher has got goals to wreck us.  Unlike those others, he had the power of a cadre misinformers behind him either lapping up or repeating his every word. He first came on the scene pedaling the very successful anti-Critical Race Theory hysteria. This got him heavy mainstream attention.

And now he has set his sights on attacking LGBTQ people.  Or at the very least, telegraphing it with the clumsiness of a James Bond villain. And with that clumsy telegraphing comes much embellishment.  That's always our saving grace when it comes to the enemies of our equality. They lie so much that they tend to lie to themselves.

Rufo's clumsy telegraphing continues with a bunch of tweets he sent out Friday: 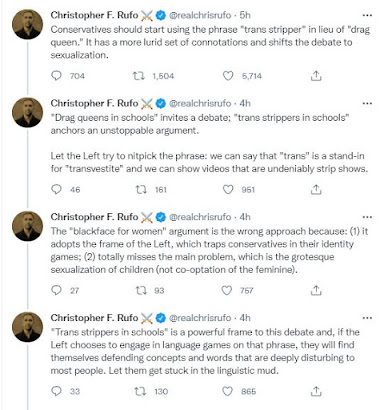 There are no "trans strippers in schools" It is an absolutely ludicrous term which I am sure that Rufo and others on his side of the spectrum will defend with fake photos, videos taken completely out of context, one-sided debates on Twitter and the right-wing media, and doublespeak defenses so illogical that they would make your head spin.
But the point is how Rufo is openly telling people to play distortion games. To him, it's not whether or not there are actually trans strippers in schools (there aren't,) but that folks on his side can deceive and scare people with the idea. It's not about truth with him. It's about "framing the argument" even if the frame is a reprehensible lie.
Like the recent spread of the fake drag queen photo committed by other conservatives, Rufo's eagerness and unashamed openness in telling people to lie in order to cast LGBTQ people as groomers says more about his willingness to put us in danger than about him actually wanting to protect children from danger.
Posted by BlackTsunami at 12:18 PM No comments: