Maggie Gallagher, NOM should simply stop being such liars 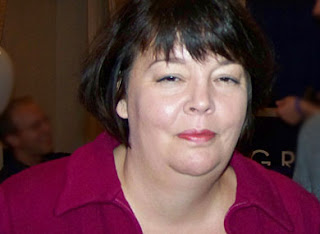 Today's Know Your LGBT History has been pre-empted because apparently Maggie Gallagher and the National Organization for Marriage think that gay people are stupid.

Yesterday I posted that Equality Matters caught the National Organization for Marriage putting a post on its blog which used the work of the discredited researcher Paul "gays stuff gerbils up their rectums" Cameron.

Equality Matters also pointed out that this sort of thing is the standard for NOM. On its blog and on the blog of its affiliated group - The Ruth Institute, NOM posts links to pieces either showcasing anti-gay propaganda or junk science designed to demonize the gay community, especially in terms of our interaction with children.

Apparently attention to this fact must have really bugged NOM because today, former chairwoman Maggie Gallagher posted a piece on the group's blog which basically said that just because NOM puts something on its blog doesn't mean that its endorsing the work:

Some in the gay blogosphere are trying to assert that NOM--or me--endorses the view of every blogger/article NOM links to, by the act of linking to it.

This would lead to the absurd conclusion that NOM endorses the editorial positions of the New York Times, because NOM links to them--or The Advocate for that matter, as we often link to stories in the gay press.

The standard "a link constitutes an endorsement" would cut off the free flow of ideas at the knees.

Excuse me? Apparently Gallagher must think that we are stupid. Passing along information about the gay community which you know to be inaccurate and incredibly stigmatizing is not the "free-flow of ideas."

It's lying. You can't explain it away and you certainly can't sugarcoat it.

Maybe I shouldn't be so abrupt with Gallagher. She was always a poor spokesperson. Remember this part of her piece:

Okay, how about when Brian Brown told the following lie at a New York rally early this year:

" . . . kids as young as kindergarten are taught in Massachusetts that their parents are bigots because they believe marriage is the union of a man and a woman."

Or how about the time earlier in 2010 when Gallagher cited a study about abused children to make the case against marriage equality even though no same-sex couple took part in the study.

Or how about when NOM blanket states with flyers designed to imply that gays want to use marriage equality to corrupt the innocence of children. Flyers like so:

Or how about now when NOM is teaming up, even as I speak, with the Minnesota Family Council, a group which spreads inaccurate information via its site that gays engage in pedophilia, bestiality, and the consuming of urine and feces.

Of course Maggie Gallagher doesn't attack same-sex couples.  She simply leaves those nasty actions to the groups NOM aligns itself with and then plays stupid when these groups are caught in the act.

If that's not bad enough, Jeremy Hooper  from Goodasyou.org points out several other things:

For starters, we could talk about the times you, Maggie, called homosexuality an "unfortunate thing" and "at a minimum, a sexual dysfunction much as impotence or infertility," suggested gays "can always control their behavior," called on a sitting President to give more research dollars to "ex-gay" research, or talked about the "several kinds of sins" that both gays and their supports commit every time they support marriage equality. Then we can go from there.

But absolute final straw is when NOM - and Gallagher - have the audacity to lie to us that they mean us no harm when we see their weapons for our destruction plainly behind their backs. And they aren't even trying to hide them.

The lgbtq community knows the difference between a kiss in the lips and a kick in the chops and Gallagher's piss poor explanations to the contrary are fooling no one.

Posted by BlackTsunami at 3:27 PM 2 comments:

As we all know, the National Organization for Marriage is cozying up to various Republican presidential candidates, including Newt Gingrich.

And apparently because of that, we have the following footage of an incident which took place when a recent Gingrich fundraiser. Allegedly, NOM's president, Brian Brown, attacked a reporter, Andy Kroll, from Mother Jones - a progressive magazine - and shoved him out of the room when Occupy protesters appeared. From Joe.My.God comes a segment of the Keith Olbermann show with the reporter in question talk about the incident along with video footage. The part about Brian Brown begins at 3:12:

Pull your eyes from the lovely video of Brian Brown making an idiot of himself on camera (again) to ponder the irony that his organization thinks that gays and lesbian wanting to protect their relationships and families are the biggest threats to marriage, while a thrice divorced politician is it's savior

Perry’s Staff Divided Over ‘War On Religion’ Ad - Rick Perry's gay staffer opposed a homophobic ad. What's wrong with that sentence? The fact that a gay person would work for such a man.

Faith-Based Group on Troy Mayor Controversy: 'Enough is Enough' - The mayor of town makes a nasty statement about gays, faces a backlash, and now some folks are sticking up for her. The poor thing. Her religious liberty to call gays "queers" (in a negative connotation of course) has been violated.

“I no longer identify as a Christian . . .” they write - A good friend of mine is fed up with phony cries of "Christian persecution coming from the religious right.

Unbelievable. Earlier this week, I post a piece about a Macy's employee who was fired for harassing a transgender customer. Today, we learn more details about this case because she is now suing:

Natalie Johnson is a 27-year-old student and, until last week, worked at the River Center Macy's.

On Nov. 30, a teenager shopping caught her attention.

"I made sure to keep an eye on him because he was shopping for women's clothing," remembered Johnson.

She said she was convinced the shopper was a man. So when she saw him in the women's dressing room, she told him he couldn't change there.

"I had to just straight forward tell him, 'You're a man,' and of course that made him really got him steamed," said Johnson.

But the group of people he was with supported the shopper, arguing Macy's policy allows transgender people to change in the fitting room of the gender they associate with.

"I've made my choice the other day," Johnson told her manager. "I refuse to comply with this policy."

Johnson said she was let go.

Johnson filed a complaint with the Federal Employment Commission, claiming her religious beliefs prevent her from recognizing transgender people.

"There are no transgenders in the world. A guy can dress up as a woman all he wants, that's still not going to make you a woman," said Johnson.

There are so many things to be said about this. First of all, I refuse to believe that this woman filed this lawsuit on her own volition. Someone, or rather some organization talked her into it. This woman has no case because she admits that she refused to comply. The religious belief argument is a dodge. No one was attacking her religious beliefs. She was the aggressor. She was the violator. If she had a problem, she should have stepped aside. No one was forcing her to be in the dressing room (aren't dressing rooms usually confined to one person anyway) with the customer?

This woman felt that she was above following the policies of her employer and found out that no, she was not.


No doubt the organization - and I bet it's the Liberty Counsel -  that pushed Johnson into filing this lawsuit hopes to exploit people's fears about the transgender community and the lie about "men being able to invade women's bathrooms," etc.

Those who are steaming over this - and you should be -  should forget making this woman the onus of your anger. She is nothing more than a tool. Email Macy's and send the company your support for standing up for our rights and dignity. And most of all, tell Macy's to not back down.

Macy's stands up for the lgbtq community

Posted by BlackTsunami at 5:10 AM 7 comments: