As we watch the situation in Afghanistan, an old but reliably annoying reality is playing itself out.

Right-wing figures are attacking “woke ideology” in the U.S. military and using anti-LGBTQ rhetoric in their tirades against the American withdrawal from Afghanistan, including spreading the false claim that the U.S. embassy in Kabul flew a LGBTQ pride flag on its rooftop ahead of the Taliban's takeover.

. . . Right-wing media’s narrative of a culture war claims that American values are threatened by the rise of critical race theory (CRT), identity politics, and the LGBTQ rights movement. In the past year, right-wing actors have turned CRT into a cultural war by attacking school boards, corporations, and even the military in an effort to gin up their conservative base ahead of the 2022 midterm elections. After recently spending weeks attacking the military and Chairman of Joint Chiefs of Staff Chief Gen. Mark Milley for their alleged “wokeness,” right-wing media are now roping anti-LGBTQ rhetoric into their coverage of the Afghanistan war: 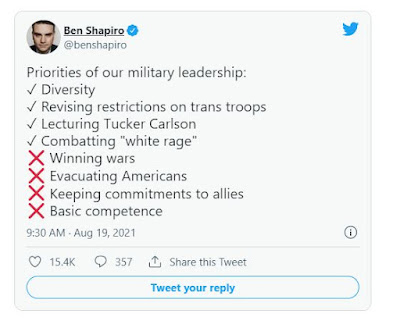 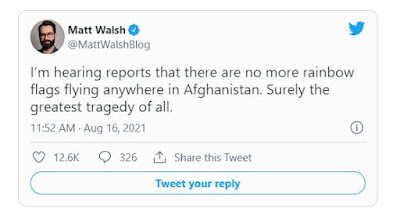 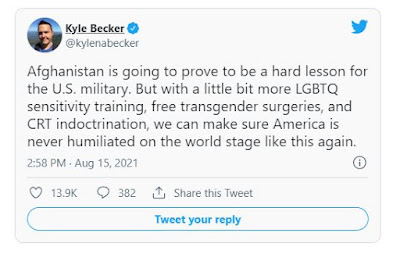 Unfortunately, as the Media Matters article points out, the examples above are just a few of the right-wing feeding frenzy. Of course none of these folks making the accusations provide even the smallest iota of proof as to their attacks on the LGBTQ community and 'woke' ideology.' Why should they?
The people who follow their tripe aren't looking for proof nor are they looking for reasonable arguments. They only want validation of their prejudices, fears, and false sense of entitlement and superiority.
Posted by BlackTsunami at 3:28 PM 1 comment: 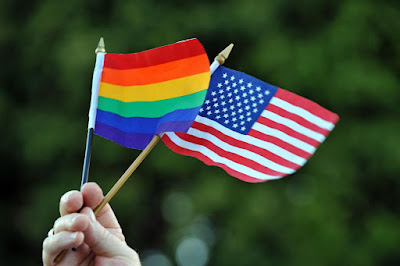 Antigay evangelical admits he’s “addicted” to suing for “religious freedom” - You wanna run that by me again?

How LGBTQ+ Excellence Helped Shape Broadway - You better believe it!

Afghanistan’s Gay Men Fear Death as Taliban Judge OKs Stonings - Keeping our eyes and hearts on the folks in Afghanistan.