What a drag. My modem is shot so I am here in McDonalds trying to download AOL so i will have access to dial-up until I get to Time Warner. And my patience is low. God help those two black men next to me criticizing the gay community. Anyway, please enjoy these news briefs and I hope to have things fixed by tomorrow morning:

Why Does The Right Still Insist Being Gay Is A Choice? - Because they live in a parallel universe of EXTREME stupidity.

Gay, lesbian households increase in Okla. - We only did it to piss off Sally Kern. lol

Michele Bachmann, This Gay Man Thanks You - I couldn't have said it better myself.

Posted by BlackTsunami at 4:05 PM No comments:

Hilarious! I'm all for this!


Rick Perry Ally Bickle Says Marriage Equality Is "Rooted In The Depths Of Hell" - Imagine having Rick Perry in the White House.

The controversy about Michele Bachmann's husband, Marcus, and his clinic is sad on so many levels.

There is the sadness at the thought of the men and women exposed to the fraudulent idea that somehow their God-given sexual orientation is evil and therefore should be eliminated.

And then there is just how low those on the right will stoop to cover for the Bachmanns.

Witness the Family Research Council's Peter Sprigg during an interview espousing the view that the controversy is not a big deal:

And then there is this madness by the National Organization for Marriage giving cover to "professional ex-gay" and known deception artist Greg Quinlan: 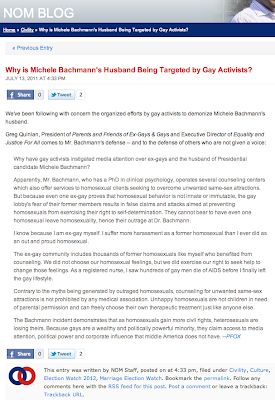 That theme - that the Bachmanns are the "victims of a conspiracy" is recurrent throughout religious right talking points about this controversy.

Yet none of these so-called "moral folks" have addressed the question that if Bachmann's clinic is providing such a good service then why did he feel the need to lie about it.

Indeed more than anything I could ever say, the Bachmann controversy underscores how broken the moral compass is for those in the religious right.

I've said it before and I will say it again:

Lies in the name of God are still lies.