I may catch some flack for this one but I have always had a secret liking for Liberace.

Any man who could rock a fur like he did is awesome in my book.

The sad thing is that he never came out. Can you imagine what would happen if he were alive now and did come out. The following are clips from a BBC documentary on his life. Parts of it is not nice so I included a tribute to Liberace from Good Morning America shortly after he passed away:

Fifth-Grader Prohibited From Giving Speech Supporting Marriage Equality - Today, it's speeches about the topic. Will tomorrow bring children in same-sex homes prohibited from talking about their families? An ugly future to ponder but also a religious right dream.

Express Delivery: The Regnerus “Gay Parenting” Paper Took The Fast Lane To Publication - Box Turtle Bulletin has come up with a theory about that fraudulent anti-gay parenting study which we should investigate more. What if it was created specifically to be used in the upcoming DOMA and Prop 8 cases?

COMMENTARY: South Africa’s “corrective rape” of lesbians - "Corrective rape" is how some countries maintain so-called "family values." Of course the religious right won't ever tell you that.

Thorne-Begland 'humbled' by appointment as judge - Republicans in Virginia fail in their attempt to keep an openly gay man from being appointed as a judge.

Leon Panetta, Secretary Of Defense, Salutes Gays In The Military - The loud popping you hear are a million anti-gay heads exploding.

I'm not saying that the National Organization for Marriage is ducking the heat regarding the recent fraudulent study bought and paid for by one of its founders and chairman emeritus Robert George, but I find it hilarious that NOM hasn't talked about the study on its blog as much as it did when the study first came out.

However, NOM is spotlighting a flow chart created by university research assistant (who shall remain nameless because with his name out there, NOM will no doubt claim that his life is being threatened even though no one will probably do so) on marriage equality. In all honesty, I have no idea what this young man's stance is on the issue. He could have created the flow chart as a class exercise.

NOM claims that the flow chart proves the duplicity behind marriage equality. 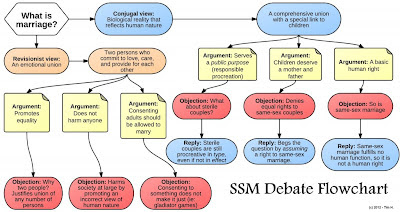 So according to this flow chart, marriage equality is similar to gladiator games and sterile couples can still procreate.

It has to be a joke, really. This chart is mere philosophical tripe which has no bearing on real world situations. It doesn't speak out the millions of same-sex couples who are leading happy lives and it certainly doesn't say a word about the same-sex couples raising children.

Best of all, what was the whole point of this thing? I would love to see someone present this trash in court just to see the judge either die laughing or choke in anger while espousing how his time has been wasted.

This is not to say that this chart doesn't have its uses.

It is nice to see the empty arguments of those against marriage equality in living color so they can be easily refuted.

By all means, please do so. And feel free to comment here.