THIS is the perfect antidote to anti-gay propaganda. USE IT! 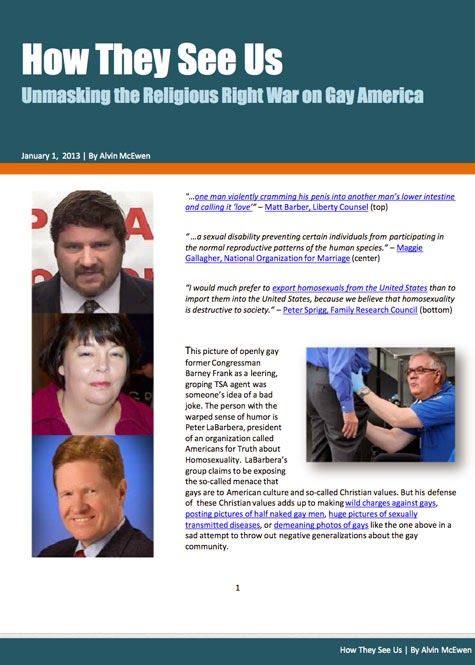 With the anti-gay right and its supporters going ape-crazy today over Vision America and claiming that gays are of Satan, recruiting children and bound for hell, I thought this would an appropriate time to again showcase How They See Us: Unmasking the Religious Right War on Gay America.

How They See Us is a free booklet which I published online last year specifically because I feel that this so-called culture war has been slanted against the lgbt community from the start. We, and everyone else, argue about lgbt equality on a religious level and are forgetting that the religious level is merely the way that anti-gay groups and spokespeople are hiding their deliberate spreading of anti-gay propaganda.

In other words, the lgbt community has a serious problem. No matter how nasty or wildly untrue the lies said about us by the opposition are, anti-gay groups can always hide their hatred and deliberate spreading of propaganda behind the veneer of "morality" and "Scriptures." If anti-gay groups and their spokespeople said the same things about  African-Americans or those of the Jewish faith, no one would fall for their claims to be speaking "from their faith."

But they can get away with when talking about us because we don't make enough effort to challenge the fact that their propaganda isn't coming from the Bible but their own dark minds.

Until we do, we are going to be having the same conversation continuously and always on the turf of "religious liberty," rather than "lies told in the name of God."


HowThey See Us by Alvin A. McEwen

This is a free document so please feel free to read it,  pass it along, and embed it on your own blogs, webpages, etc.

And if you are having a problem reading or downloading How They See Us from Scribd, this link will take you to a direct adobe acrobat copy which you can read, print out, download, or save.

Or you can go to this page to get some background and then print out a direct copy.

I get no payment, restitution, or any form of compensation from this booklet.

I'm just so damn tired of fighting this battle on the turf of these charlatans. I'm tired of having to explain myself as a gay man and having to defend myself from false claims that I'm a pedophile, I'm going to hell, or I'm trying to "silence" people. And I am so tired of no one addressing the fact that these claims are ugly lies instead of making me seem like the bad guy because I demand dignity as an lgbt.

And I know that many, if not all of you, are tired too.

Anti-gay groups may have the money, parts of the media, and some members of Congress, but we have the truth.

But our problem is we wait for them to spread the lies before we start pushing the truth. Let's start spreading a little truth in preparation of these lies.
Posted by BlackTsunami at 3:12 PM No comments:

Duck Dynasty star: Gays are going to hell is ‘what the Bible says’

Pat Robertson Recalls The Days When Gays Were Stoned To Death, Blames Satan For Gay Rights

And there you have it - three reasons why Christianity is getting an awful reputation these days. Odious, self-righteous folks lacking humility and introspection in their rush to judge others. They are so eager to clutch their Bibles in sad attempts to defend their need to attack families and persons who don't fit their definition of morality while at the same time willing to play the victim when called out for their attacks.

They pervert the Word of God into a whip which only they have the right to wield.

It's like what I said in my booklet, How They See Us: Unmasking the Religious Right War on Gay America:

Whether it be the defense of “Southern culture,” the “German homeland,” or “Judeo - Christian values,” it all adds up to the same thing - isolating an innocent group as the essence of evil and claiming that if only said group were put in its place, the world would be a better place.

Posted by BlackTsunami at 9:23 AM 5 comments: