Anti-LGBTQ evangelicals continue to debase themselves in defense of Trump 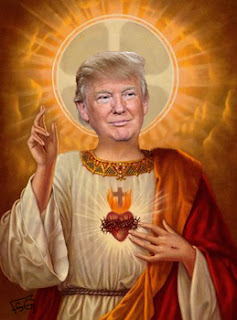 Whether it be Jerry Falwell, Jr's embarrassingly un-Christian interview defending Trump (for which he was rightfully vilified for), Franklin Graham's tone deaf claim about the media unfairly targeting Trump, or the American Family Association's pushing of Trump's lie that Obama has a wall built around his house (even after the claim was refuted), it's rather sad to see the anti-LGBTQ evangelical right end 2018 and begin 2019 debasing themselves in front of the nation to stay in Trump's good graces.

You know the shutdown which Trump said he would own because he wants us to pay for some ridiculous and disgustingly expensive border wall. A border wall, mind you, that he said repeatedly that Mexico would pay for.

Of course in its Washington Update, FRC doesn't include any of this. Instead the group chose to post stuff like the following:

This shutdown is playing an important role in setting the tone for government for the next two years. As we move into a new Democrat-controlled Congress, the president's resolve will be tested against legislators bound to obstruct him at every move. Unlike other politicians who come to the negotiating table waving a white flag, President Trump is standing firm for his promise of border security. Donald Trump campaigned on border security, and he is simply keeping his promises to the American people.

President Trump strongly believes, and I agree, that it's time to take our border security seriously, because we care that American greatness can safely be offered to all who come here legally. Our hard-won freedom must be protected by the rule of law. Failure to preserve this rule of law will lead to a loss of freedom and safety for all Americans.

The tackiest thing about all of this is that these evangelical groups and figures aren't fooling anyone. Granted, they have their followers who will believe anything they say, but for the most part, as they continue to praise Trump, build up Trump, or kiss Trump's butt, they are merely digging a hole in which their credibility will continue to fall.

Why do they do it? This article from Buzzfeed gives a good indication. It could be all about the judges he appoints and how their agenda could be fulfilled via these judges.  This opinion piece, via The New York Times, claiming how Trump fulfills their hidden lust for a dictatorial nationalist government also makes a wonderful argument.

But in the meantime, will they ever reach bottom? I personally don't give a crap because I'm remembering all of the times when these folks attacked the LGBTQ community. All of the times they called us evil or godless. How they constantly ruminated on our supposed sins and spun (hell, they still spin those stories) about how we are plotting to put Christians in jail or recruit children.

This new position they have carved out for themselves as Trump's unofficial excuse force could be a negative game changer for them having the power to continue peddle lies about the LGBTQ community. That is if I'm not the only one who is petty enough to collect receipts.

Come on, my LGBTQ brothers and sisters. Don't let me be alone here. Now is the perfect time to be petty.


Conservatives viciously mock a trans woman who was misgendered on video - I've heard about this video and have seen it. A lot of folks were saying the trans woman should have acted better. Maybe or maybe not. But I will say this. I don't give a crap. It's wrong to make someone the butt of jokes. That shyte ain't right and it ain't funny. And I say this as someone who have watched people goad gay folks to act out, then make them into the bad guys because they wouldn't take the abuse. I've walked into a room filled with my so-called black brothers and sisters and have been laughed out simply because I seemed to "gay" for their company. Maybe there is a time to act with dignity. But sometimes you get tired of people #@!* with you. So I have a hard time thinking that sister girl in the video is at fault. But I will say this - it's not funny to goad someone then make it viral. It's cruel and nasty. And I have a hard time with that "if only she acted this way or that way" stuff. Homophobes and transphobes are just like racists in that it doesn't matter if you act like the most dignified person in the universe. They are going to hate you and belittle you in anyway they can. The video probably caught sister girl at at time in which she got enough of it.  It's like I said earlier, sometimes you get tired of people #@!* with you. I'm done.


These beautiful brides got married minutes after it was legalized in Austria - Austria made marriage equality legal and didn't even have to wait for us to take full advantage of it.

White House considers lifting sanctions so anti-LGBTQ Russian official can visit - Oh really? Then again maybe not. 2019 will be another year of collecting the receipts. But this year, we should plan on fully using them.

Rose Parade Queen Is First From LGBTQ Community - Another barrier crossed. It may seem small to some, but it's not.


Editor's note - I hope my friend Monica Roberts at Transgriot don't mind me nabbing the above graphic.
Posted by BlackTsunami at 9:21 AM No comments: