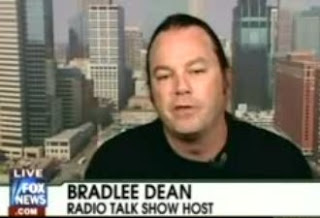 There is a huge controversy right now in Minnesota which supposedly threatens the future of a vote on gay marriage in the state:


A freshman Republican House member apologized Friday for inviting a pastor who has frequently spoken out against homosexuality to deliver an opening prayer — an appearance legislators of both parties denounced.

Rep. Ernie Leidiger, R-Mayer, confirmed that he invited Bradlee Dean to give a prayer on the House floor, which Leidiger said just happened to be scheduled on the same day House leaders considered voting on whether to put a constitutional amendment banning same-sex marriage on the 2012 ballot.

Apparently during his prayer, Dean made a reference to President Obama not being Christian:

This caused a controversy on the legislative floor that was so bitter that they actually re-did the opening prayer with another chaplain and the entire opening session. Also, legislators scrambled to either denounce Dean or absolve themselves from blame because of his appearance. Not only that, but now the idea of putting gay marriage to a public vote may not be a certainty:


As DFL and GOP House members expressed outrage over Dean's appearance, a vote in the House over the amendment appears to be less certain, especially given that some Republicans had already said lawmakers should focus on the budget before taking up the issue. The Senate already approved the measure, so the House vote is the last step toward putting it before Minnesota voters.

And like with all political controversies, it's not always just the initial incident, but also what the incident reveals about the parties involved.

Dean's history of bashing the lgbt community, including support of the sodomy laws, are now more publicly known. Through his ministry, You Can Run But You Can't Hide, Dean has called lgbts sexual predators and has advocated for jailing members of the lgbt community.

Read more »
Posted by BlackTsunami at 9:16 AM 2 comments: