In an irony which would be funny if it weren't so vile, FRC spokesman Peter Sprigg yesterday actually criticized the Obama Administration for its work against countries which persecute gays.

. . . on yesterday’s edition of “Washington Watch,” FRC senior fellow Peter Sprigg — who once called for the U.S. to “export homosexuals” — criticized Randy Berry, the Special Envoy for the Human Rights of LGBT Persons, for reportedly traveling to travel to Uganda and Jamaica, where homosexuality is also criminalized. Sprigg said that Berry and the Obama administration are trying to “force this American-style homosexual agenda down the throats of other countries” such as Uganda, “which is one of the countries which has been most bitterly attacked by homosexual activists around the world.”


For the record, Sprigg is actually defending anti-gay persecution in Jamaica where, according to a Human Rights Watch report entitled Not Safe at Home:

LGBT citizens in Jamaica are often driven from their communities by neighbors and sometimes even family. Some health professionals stigmatize them by casting judgment on their sexuality when they seek care. Police protection against bias and physical attacks is generally poor.


And in Uganda, where laws and persecution against gays have been the subject of international unrest for a number of years.

But to Sprigg and the Family Research Council, gays and the Obama Administration are at fault for attempting to put an end to this persecution. 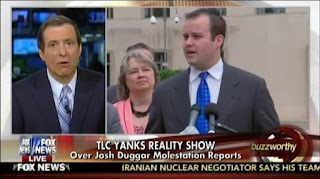 Fox News Devoted Less Than Two Minutes To The Duggar Controversy - It's not that I want Fox News to go buckwild on the Duggars scandal, but we all know that if this situation involved a prominent lgbt activist, the network would have probably devoted several shows and a prime time special to it.


Rick Santorum's 5 Worst Smears: Attacking Gay Rights, Working Women & Church-State Separation - Like some sentient fungus, Rick Santorum just won't go away. He is taking another chance at running for president. Just in case he tries to "retool" his image, let's not forget his past positions, particularly on lgbt equality.

Divisive anti-gay marriage bill falls in Texas Legislature - And another one bites the dust. The problem is that there are so many others in waiting.

Why The Assault On LGBT Rights In The Texas Legislature Failed - The Texas legislature in general was seriously "jonesing" to kick lgbt equality square in the teeth. But it looks like the anti-gay bills all failed, leaving the Texas lgbt community feeling like Buster Keaton in that movie where the house fell on him, but left him unharmed because he stood in the path of an open window.
Posted by BlackTsunami at 9:08 AM No comments:

Leave it to the Family Research Council to sink to a new low in order to fundraise. I received the following email from FRC president Tony Perkins:


Please Take a Stand for Persecuted Christians In America . . . and Everywhere!

When I testified before U.S. Senators about religious persecution, I wore it.

When I testified before the United Nations about religious persecution, I wore it.

When I travel around the country wearing it, people ask me what it stands for—and it helps open their hearts to Christ and His people.

"It" is a simple lapel pin.

The pin features the Arabic letter "N" (which looks like a "U" with a dot above it).

ISIS uses this, "N" when wanting to identify Nasrani, or Nazarene, followers of Christ.

In the Middle East today . . . it means persecution and death for your fellow Christians.

When ISIS terrorists—Islamic jihadist radicals—enter towns in northern Iraq and elsewhere in the Middle East, they find out where the Christians live and work.

The terrorists issue a three-way ultimatum: Convert to Islam . . . or pay a crushing religious tax that many can't afford . . . or be brutally executed.


And if the Christians won't renounce their faith?

Their home or business is marked with the "N." They are marked as Nasrani: followers of Jesus of Nazareth. And they pay a heavy price.

Christian children, moms, dads, the elderly are being massacred. Some are crucified. Some are beheaded. Some are shot. Some are bled to death by having their throats cut as they are held still. Some are tortured before enduring any of these deaths.

They are the Nasrani martyrs.

They will not renounce their Lord.

When you support FRC's efforts to stand for religious freedom—in other words, to stand for persecuted Christians in the United States as well as overseas—I will send you a Nasrani Pin as my thank you.

So far so good. I don't believe anyone should be physically attacked, murdered, or terrorized simply because of their faith. I actually commend FRC for bringing attention to this. BUT then the letter adds the following: