Sorry to folks who may feel the need to roll their eyes, but I am going to post more pictures of gay couples just married in Washington state this week:

I can't help it. But be honest. Wouldn't you rather be staring at this rather than Maggie Gallagher, Brian Brown, Tony Perkins, Linda Harvey, Matt Barber, or the rest. Of course that's not to say that I won't be on my soap box tomorrow throwing out thunderbolts as usual. But for tonight, let's just bask in the glow of progress: 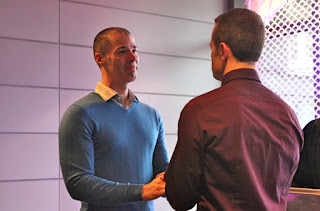 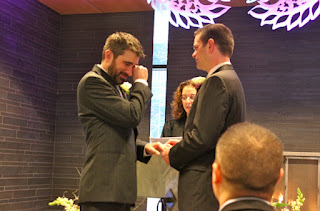 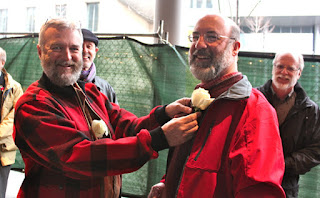 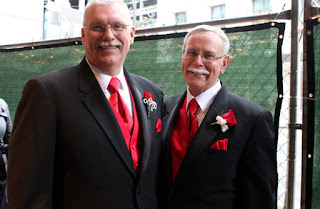 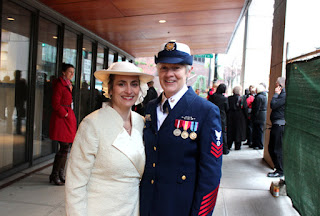 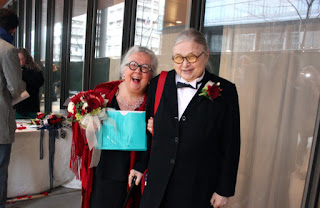 Photos courtesy of Buzzfeed.
Posted by BlackTsunami at 3:20 PM 2 comments:

Julea Ward, Michigan Counseling Student Expelled For Gay Views, Wins Settlement - Expect the religious right to be crowing over this one. However don't be deceived. Ward didn't win on merits but solely because the university decided to settle. In other words, she was lucky to be backed by a religious right group with deep pockets and eager to appeal every loss she suffers. Still, it sends a message about counselors who don't want to counsel us or our children - we won't put up with the disrespect. And in light of our recent victories, I say let the religious right enjoy this minor victory. Let them savor it and make sure it's the last victory they receive for a long time.

NOM moves forward with 'Gays Against Gay Marriage' meme - So NOM will move with its supposedly secret, nefarious plan of astroturfing a gay movement against marriage equality even though it's not so secret to us all. Now that's just tacky. There is no style in duplicity and master plots of evil anymore. It's almost depressing.

Politico Poll Needlessly Skews Marriage Equality Favorability - Nate Silver accused Politico of treating politics like a sports game. I would say he was as exact about that as he was about the 2012 election.(In case you don't know, Silver predicted an Obama landslide in the face of a lot of derision and opposition, which ended up making him look like a king while his opponents looked like a stable of horses' asses.

Barber: Almost Half of Gay Men Were Sexually Assaulted by Pedophiles as Children - Oh Matt, you are going to fit nicely in my upcoming booklet. You should see the picture of yourself on the title page. And now you give me something new to add. I swoon with thanks.
Posted by BlackTsunami at 9:24 AM 3 comments:

The conservative group One Million Moms says it is "moving on" from its recent protest of Ellen DeGeneres and J.C. Penney.

One Million Moms (OMM), a media watchdog group founded by anti-gay, conservative Christian group American Family Association, spoke with The Christian Post about its ongoing protest of "strong gay activist" DeGeneres as a J.C. Penney spokesperson, telling the publication that the group is moving on from the most recent feud.

The group made headlines this week after blasting a new J.C. Penney Christmas ad featuring DeGeneres. "JCP has made their choice to offend a huge majority of their customers again," read a portion of the statement posted to the group's website.


This is the second time the group has attacked JC Penney and DeGeneres. Initially when it was announced that DeGeneres would be the company's spokesperson, One Million Moms demanded that she be fired.

That demand backfired as folks rallied around DeGeneres and JC Penney.

With this new development, OMM recognizes that its face is cracked and on the ground.

Forgive me for saying so, but part of me hopes that this clarity doesn't strike other religious right groups when they get embarrassed during a public protest.

Then what will I write about?
Posted by BlackTsunami at 4:44 AM No comments: