Last year there was an ado about Christianity losing followers, particularly among younger folks.  A lot of reasons were given, but one reason has to be emphasized.

Case in point are these two videos courtesy of Right Wing Watch which show ministers Flip Benham and Otis Kenner working themselves into a froth and throwing out absolutely inane opinions against the LGBT community. I continue to be amazed how people who claim to be of God get so rooted in lies and hate. They can claim not to hate lgbts all they want, but words like these only come from hate.

The point is how in the world can Christianity retain any credibility, particularly with the younger crowd, when some ministers spend more time picking on the lgbt community and less time on speaking about more important issues such as poverty and inequality?

In this video, Kenner actually attempts to cite research about lgbts. But the research is over 50 years old. Of course for the rest of his rambling sermon - the part involving "invading homosexuals" - he offers no citations

Posted by BlackTsunami at 6:52 PM No comments:


Marco Rubio Defends Radical Anti-LGBT Orlando Event - Marco Rubio thinks that lgbts are the bad guys because we don't "tolerate" the opinions of those who would smear us as oversexed, diseased pedophiles who don't deserve equality. Oh I weep for his concern.

Many Americans Hear Politics From the Pulpit - Our equality continues to be a hot political issue, but we don't seem to have a good way to change the narrative.

Restroom battle may head to the Texas Legislature - Case in point . . .

Trans People Open Up About What It’s Like To Transition In The Workplace - I never really thought about this issue.
Posted by BlackTsunami at 9:17 AM No comments:

The press is making a huge issue how Donald Trump lies with impunity and his supporters don't seem to care. I'm glad that they are realizing this sort of thing, but it's not necessarily indicative of just Trump.

In the nine and a half plus years I've tracked the anti-lgbt right, I've seen the same thing happen continuously. Only hardly anyone in the mainstream seemed to have cared how so-called religious right groups distort science and truth to demonize lgbts and spread all sorts of bad information to their supporters and the public. Maybe this emphasis on Trump will bleed down to them. But I doubt it.

Case in point, this lovely "poll question" courtesy of the American Family Association's One News Now with regards to gender and sexual orientation. It makes no sense whatsoever, but I don't think One News Now cares about making sense or spreading truth: 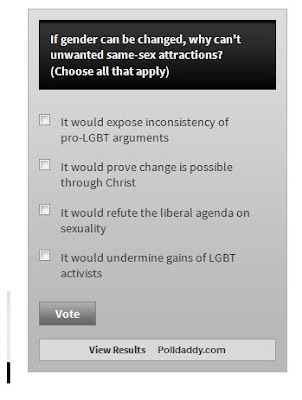