Just something to remind all of my readers (Thank you all so much by the way!My blog is swiftly headed towards 1,000,000 hits!) that I don't always focus on religious right groups. The following is intended to lift your spirits as well as remind you that no fight worth fighting for is going to be easy. But the benefits always outweigh the costs:

I give my brothers and sisters hell sometimes for the love of the "celebrity culture." However there are times when it pays to have out celebrities to bring attention to important issues such as the problems that the motion picture Bully is having with the Motion Picture Association of America:

Homeless LGBT Youth: The Next Battle For Equality - Excellent article. I urge you to read and pass it around.

Note to Kirk Cameron: If you don’t want a fight, then don’t start one - Warren Throckmorton breaks down this Kirk Cameron controversy in a simple-to-understand way - if you don't want any trouble, then don't start any trouble.

Joseph Farah Explains 'What Same-Sex Marriage Advocates and the Terrorists of the Gaza Strip Have in Common' - Joseph Farah claims that lgbtqs unfairly cast ourselves as victims of homophobia. This from a man whose publication features a columnist who refers to us as the "sodomy lobby."

Islamic And African Nations Walk Out Of UN’s LGBT Equality Hearing In Protest - Ugh. Well no fight worth fighting for is ever easy

Posted by BlackTsunami at 9:19 AM No comments: 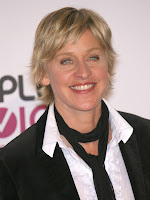 The American Family Association's sub organization One Million Moms (yeah right) has officially admitted that it failed in its boycott against JC Penney. The organization was demanding that the department store remove Ellen DeGeneres as its spokesperson because she is openly gay.

However JC Penney refused to do so and folks - especially the lgbtq community - rallied around DeGeneres.

So One Million Moms took the hint:

The leader of a pro-family advocacy group says only time will tell whether JC Penney's decision to have a high-profile homosexual entertainer as its spokesperson was a good business decision.

Despite opposition from the American Family Association's advocacy group OneMillionMoms.com, the retailer is backing its commitment to the Ellen DeGeneres (see earlier story). Director Monica Cole tells OneNewsNow that other issues require her group's attention, so OMM is moving on.

Cole believes OneMillionMoms has done its job by educating members about the retailer and urging them to take their business elsewhere. She says only time will tell how business goes for JC Penney.

This makes the second high profile embarrassment for One Million Moms. Earlier this year, the organization threatened to boycott the national chain Toys R Us if it ran an issue of Archie Comics featuring a gay wedding.

Posted by BlackTsunami at 4:42 AM 5 comments: