Via a webpage pushing a deceptive campaign, anti-LGBTQ and conservative groups seem to be stepping up efforts to undermine gay adoption and gay families.

Groups such as the Family Research Council, the Heritage Foundation, the Alliance Defending Freedom, and a few others have been steadily making the case that faith-based foster care and adoption agencies which refuse to work with gay couples should still receive tax dollars. A few states, such Oklahoma and Kansas, have passed legislation saying so. Other municipalities, such as Philadelphia, however have made it clear that tax dollars shouldn't go to entities which discriminate for any reason. And Philadelphia won in court on that premise.

Apparently there is now a website sponsored by the aforementioned groups which makes the case for tax dollars going to discriminatory agencies. The website (keepkidsfirst.com  and the hashtag #keepkidsfirst ) claims that children will suffer greatly if faith-based adoption and foster care agencies are made to follow the rules:

Hundreds of adoption agencies and foster care providers across the country are founded on Christian beliefs and operate according to those beliefs. But a current effort is underway to target these faith-based providers and force them to abandon their beliefs or shut them down. Why? Because these faith-based adoption and foster care providers believe that every child deserves the chance to be raised by a father and mother.


Read more »
Posted by BlackTsunami at 5:04 PM No comments:


Bryan Fischer Wages ‘Major League Spiritual Warfare’ Against the ‘Demons of Hell’ Attacking Kavanaugh - Bryan Fischer takes a moment away from his usual spewing of homophobia to spew other things.


These four transgender political candidates want to shake up the status quo - Danica Roem set the standard. Can these four follow up? I hope so.

In the 12 years, in which I have worked this blog, I have been blocked on Twitter by many folks on the right, some because I engaged them, others because I have written about them, and a few because they probably heard of me.

But I will say that the following block is one I will be most proud of (click on picture to enlarge): 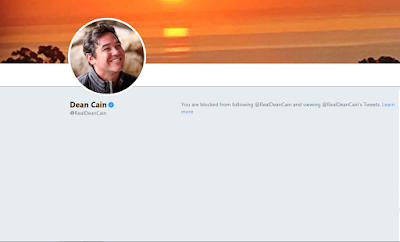 Mr. Cain, my guess is that you didn't care for our twitter conversation nor the fact that I publicized it. I could care less. It's like I said in the post: