I confess that I have been a little lax on this series. I blame it on the religious right. But anyway, let's talk about one of my special heroes: 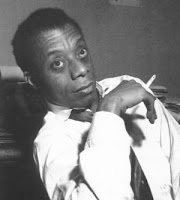 When James Baldwin was an infant, his mother, Emma Berdis Joynes, moved to Harlem, New York, where she married a preacher, David Baldwin, who adopted James. The family was poor; and James and his adoptive father had a tumultuous relationship. James Baldwin attended the prestigious DeWitt Clinton High School in the Bronx, where he worked on the school magazine together with Richard Avedon.[2] At the age of 14, he joined the Pentecostal Church and became a Pentecostal preacher.

When he was 17 years old, Baldwin turned away from his religion and moved to Greenwich Village, a New York City neighborhood, famous for its artists and writers. Here, he studied at The New School, finding an intellectual community within the university. Supporting himself with odd jobs, he began to write short stories, essays, and book reviews, many of which were later collected in the volume Notes of a Native Son (1955).

During this time Baldwin began to recognize his own homosexuality. In 1948, disillusioned by American prejudice against blacks and homosexuals, Baldwin left the United States and departed to Paris, France.

In Paris, Baldwin was soon involved in the cultural radicalism of the Left Bank. His work started to be published in literary anthologies, notably Zero, which was edited by his friend Themistocles Hoetis and which had already published essays by Richard Wright. He would live as an expatriate in France for most of his later life.

On November 30, 1987 Baldwin died from stomach cancer in Saint-Paul-de-Vence. He was buried at the Ferncliff Cemetery in Hartsdale, near New York City.

James Baldwin's candor about being gay is why I admire him the most. The following is a small clip about his life: